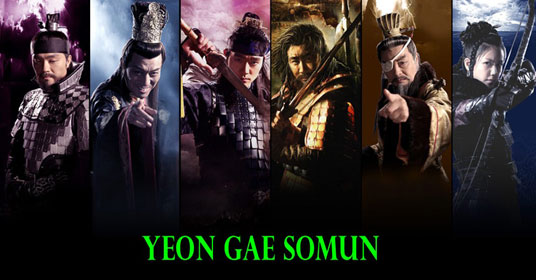 Yeon Gae Somun is the general who killed the penultimate King of Goguryeo, Yeongnyu, in 642. It was a period of tremendous instability, both because of the pressure by Shilla, but also because the political situation in Goguryeo was very confusing. After General Yeon put Yeongnyu's nephew Bojang as his puppet on the throne following his coup detat, he tried with little success to calm down Yeon's two sons in trying to gain power, and started repressing Buddhism (the Kingdom's official religion) in favour of Taoism.

Yeon Gaesomun is the title of a television historical drama. Yeon Gaesomun (603 - 665), was a powerful and controversial military dictator and Generalissimo in the waning days of Goguryeo--one of the Three Kingdoms of ancient Korea. Traditional Korean histories paint Yeon as a despotic leader, whose cruel policies and disobedience to his monarch led to the fall of Goguryeo. However, his achievements in defending Goguryeo against Chinese onslaughts have inspired Korean nationalist historians, most notably the 19th century Korean historian and intellectual Sin Chaeho, to term Yeon the greatest hero in Korean history. Many Korean scholars today echo Sin and praise Yeon as a soldier-statesman without equal in Korean history, though other scholars strongly disagree. Chinese and Japanese scholars continue to hold an unfavorable view of Yeon.