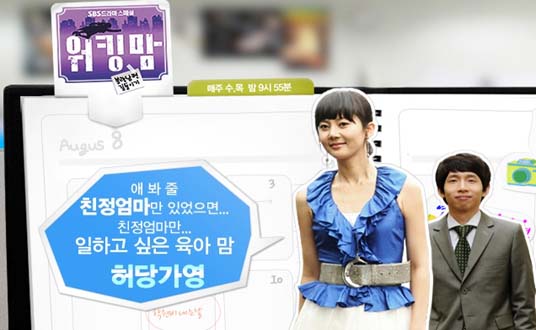 The drama is about a business woman turned housewife, Choi Ga Young. She used to be a successful business woman but that was until she got pregnant with her younger boyfriend's baby. Now she is married to Park Jae Sung and they have two sons together. In hopes of having her children well provided for, she tries to find somebody for her father so that he could remarry. The only trouble is her stepmother refuses to babysit her children while she goes back to work and to add onto her problems, her husband is secretly seeing his colleague. Hooray for all Korean ajumma or housewives - thanks to actress Yum Jung-a.

In SBS TV drama "Working Mom," which airs every Wednesday and Thursday at 9:55 p.m., Yum plays Ga-young, a tough ajumma who struggles as a working mom.

"Ga-young is a character who is forced to give up her career to look after her kids," Yum said. "She represents many of today's working moms in Korea who have to decide between their jobs and starting a family."

The show is proving to be quite a hit. Its latest episode last Thursday attracted 18.2 percent of the viewers watching television, according to AGB Nielsen Media Research.

In the story, Ga-young unexpectedly gets pregnant and is forced to quit her job. Six years later, she goes back to work but finds it difficult to adapt to the new environment, especially with her troublemaker husband, Jae-sung (Bong Tae-gyu), who is younger than her, causing her problems at home.

She feels so frustrated trying to balance home life with work that she begins to act aggressively, occasionally slapping her husband around.

Jae-sung finds little sympathy. He is extremely childish and seems devoid of any rational thought or behavior.

He flirts with his co-worker, Eun-ji (Cha Ye-ryun) and in a recent episode, he quit his job and lusted after his late mother-in-law's property portfolio.

Yum really throws herself into the part and shows her husband no mercy.

"After a slapping scene, I feel sorry looking at Bong Tae-gyu's swollen face," Yum said. "But it's better to slap once and get it right than do another take."

Yum is honest about her feelings for her fictional husband. "[Jae-sung] is detestable," she said. "Of course, not all Korean husbands are like him, but I'm sure they possess at least some of Jae-sung's wilder characteristics."

Perhaps that's why many housewives and working moms feel a sense of catharsis when watching Ga-young slap Jae-sung in the face, Yum said.

In real life, Yum is the mother of a 7-month-old daughter, whom she only gets to see for a few hours each week. "I have no trouble working since I have a nanny but she cannot replace my missing heart." After the drama, she plans to clear her schedule and take care of her daughter.