Women in the Sun 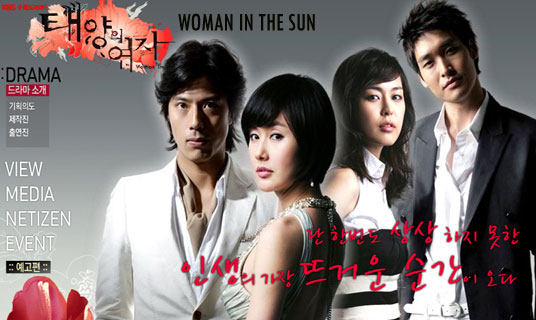 Also known as: Sunwoman, Women of the Sun

Do-Young, 33-year-old top anchor woman in Korea, apparently seems to be the perfect role model for every girl in passion. She has got it all, from educational background, prosperous family, beautiful feature, natural-born talent and even adorable personality. Do-Young shines anywhere and everywhere, but deep down in her heart, she suffers from extreme loneliness and cold. Originally, Do-young was abandoned in front of a orphanage when she was a very little girl. By chance, she was adopted to a rich professor family without any kid and lead her princess life. Several years later, when the step parents got their unexpected biological daughter, Do-young felt threatened that she might lose her parents' love and affection. So, 13- year- old Do-young abandoned her 5-year-old little sister in front of the Seoul Central Train Station and took her parental love back. 20 years later, Do-young met a charming personal shopper, Sawol, in VIP corner of a luxurious department store. By her merry and cheerful characteristics, Sawol chooses fashion item for Do-young and they starts to feel friendly each other. By the malicious purpose of Do-young's orphanage friend, Do-Young's terrible deed is disclosed and Sawol turns out to be the very sister that Do-young has abandoned. depicts two sisters and their love, desire, revenge, and forgiving.

Shin Do Young is an announcer who instigates the jealously of all women around her because of her superior looks, great abilities, and great background. But Do Young has a deep, dark secret. She was actually abandoned at an orphanage when she was young but luckily she was adopted by a nice couple. The couple were unable to have their own children but were surprised when their biological daughter was born. Do Young, afraid that her parents would no longer love her anymore abandoned her 5 year old little sister at a train station. Years have passed and Do Young meets a joyful girl, Sa Weol, who becomes her personal shopper. What happens when Do Young's terrible misdeed is revealed and that Sa Weol is actually the sister she abandoned at the train station all those years ago?

Women in the Sun trailer