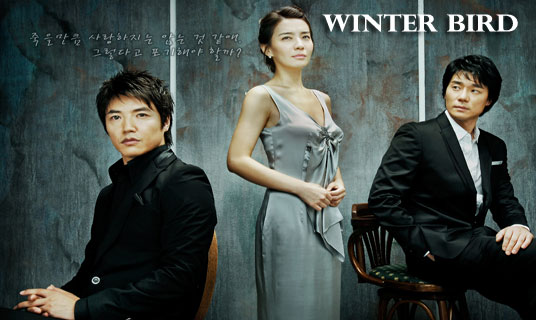 In life, you are mostly on your own.

Here is one woman who suddenly became orphaned and was taken in by a friend of her father. She is swept away by the winds of destiny, unable to express her emotions as she loses her confidence. As she goes through a nightmare marriage and messy divorce, she steadily finds her own voice. A story about finding that the people nearest to you are the most precious people.

The world is not a place where everyone is smarter and more confident than you. Many smart people are smothered by the unlucky circumstances they find themselves in. Life is about celebrating what you have in such a life. Nobody can force you to live the life you have. And they will not live it for you. But what if the choices I make will ruin the happiness of others? is a story about a woman who fights the despair she feels as overcomes the hardships and pain. Through her character, we see how a person's fate can interrupt our life.

Young Eun lived with a family ever since she was an orphan and then fell in love with Do Hyun who is 5 years older than her. However, Do Hyun's family did not approve of Do Hyun dating Young Eun. As a result, Young Eun eventually left Do Hyun and marries a doctor, Joo Kyung Woo. Although Kyung Woo acts like a gentleman, he is actually a mama's boy with multiple and complicated personalities. Though he treats Young Eun well, he believes everything his mother tells him and will turn on Young Eun at any moment. Jin Ah is a pediatric medical resident and falls for Do Hyun. But she is unsure of his relationship with Young Eun. Do Hyun decides to marry Jin Ah and after the wedding, Young Eun has had enough of Kyung Woo's mother. She decides to leave Kyung Woo. What will happen between Do Hyun and Young Eun? Will they realize they can't leave without the other?

She is like a migrating bird standing alone against the winds of destiny howling around...

She has a college degree in design and became a furniture designer. When she was in the 10th grade, her mother and father died a few months apart from each other. Her mother died from a disease while her dad was killed in a car accident. She was taken in by President Jung, who was a regular customer at her dad's restaurant and also an alumni member of her dad's high school. The sudden deaths of her parents deeply affects Young-eun and it brings a huge change in her personality. She lives with the constant stress that she is an adoptee. She becomes attracted to Do-hyun, the son of President Jung, but she never reveals her feelings to him. Do-hyun is somebody she admires and dreams of but she does not want to push her luck and try to date him. So she acts like a dutiful daughter and nice younger sister in her adopted family. She has everything she could desire thanks to President Jung's patronage but she knows very well that she must behave herself under the watchful eye of his wife who is wary of her. Thus, she reluctantly gets engaged to a person that President Jung picks out for her.

As the son of President Jung, he believes he should marry someone that he truly loves.

He is a very responsible person and has the patience to work hard to attain his goals. Although he wanted to become a sculptor, he studied management in college at the urging of his father. He is an intense person but he is relaxed around Young-eun. For a long time, he considered Young-eun to be a part of his family but when she gets engage with Ji-hong, he realizes that he loves her. His parents strongly disapprove of his decision to marry Young-eun but he doesn’t back down. When he finally returns from his studies, he learns that Young-eun will get married to someone else. So he has no choice but to let her go but when he finds out that she is trapped in an unhappy marriage, he realizes how irresponsible he was. He overcomes the pain he endured and takes a strong stance to protect the one person he loves. He starts to get involved with Young-eun but his mother does everything she can to keep them away from each other.

He graduated from a top medical school and is on his way in becoming a dermatologist. He is polite and warm on the outside. But he is an introvert and momma boy who has a splintered personality. Deep down inside, he is a tender person with a warm heart but his overbearing mother makes taxing emotional demands on him. He likes his wife Young-eun but he cannot refuse the demands that his mother makes on him. He is a timid person most of the time but when he is crossed, he will turn very violent. He broke up with his first love because of his mother. He loves Young-eun but he doesn’t know how to express it. He is held on tight strings by his manipulative mother.