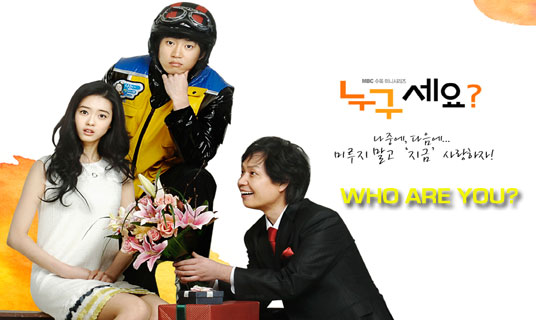 A ruthless corporate raider shares his body with a spirit who has 49 days to spend in this world to meet his daughter! A fantasy drama with a heartwarming story

Facing death, a man is allowed to wander the human world as a ghost for 49 days. He'll buy the things he never got to buy for his daughter and take her out to restaurants that he never could afford before and buy all the clothes she'll ever want! Fortunately, the owner of the body that he is borrowing is Cha Seung-hyo, who happens to be young and filthy rich!

A plot with melodramatic moments that uses humor to approach taboo material. Who are you? My dad? Or someone else?

I've fallen in love with him. I found myself helplessly falling in love... But is it true that the soul in his body is my father's? When my heart races as I try to kiss him, he'll turn away, But when Seung-hyo tries to kiss me, I have no choice but to push him away in this complicated romance...

Two men sharing one body A ruthless corporate raider and a clumsy motorcycle messenger... Two souls sharing one body! Two men living under one roof but living opposite lives! Who are you? Don't hesitate to pursue love in all its entirety! Don't let love slip away, leaving you with regrets for the rest of your life!

The Korean branch manager of Bluestone, a successful American hedge fund. He uses financial instruments to make investments in all kinds of commodities, equities, hard assets and so on but he's mostly known as an M&A specialist. He was abandoned by his parents and grew up in an orphanage until he was adopted at the age of seven. He has an IQ score that exceeds 150! That is mainly why his foster parents adopted him. He is a legal U.S. citizen and also thinks like an American. After returning to Korea to take on a new assignment, he gets involved in a car crash...

After his accident, he begins to act strange?! Unbelievably, he begins to see ghosts! He doesn't want to believe what the ghost is telling him... The ghost is the father of the girl he loves and it's been entering his body without his permission!

Recently graduated from high school. Though she gained admittance to Sejong University where she was planning to major in animation art, the sudden death of her dad forced her to forgo college. During the day, she works as a waitress at a barbecue pork restaurant and at night she works at a convenience store to make a living. In her personal web blog, she writes down everything that happens in her life and draws her own online cartoon strip for everyone to see.

She can't afford college and so she decides to enter a drawing contest to pursue her dreams. Drawing cartoons in her spare time is the only joy in her life. It holds all her hopes and it's the reason why she wakes up every morning to keep living. She's eccentric. Aloof. It's hard to nail down what kind of temperament she has. She's like a thriller movie with a surprise ending. She has a thorny personality that is somewhat lovable and her smile is like the sun shining on a warm spring day! After her mom died, it was just Young-in and her dad. After her dad died in a motorcycle accident, a total stranger appears in her life and behaves like her dad?! Cha Seung-hyo, who appears in her life, is mean and sweet in a very odd way...

He was a hardworking motorcycle messenger who died before his time was up due to a motorcycle collision. That is how he became a ghost. Before he crosses the river of no return, he is allowed to roam the human world for 49 days! He has something he must tell his daughter within 49 days. He puts heaven on hold as he haunts the human world, trying to communicate with his daughter! Foolish and awkward, he cannot hold himself together. He constantly stumbles and makes mistakes. "I am told that I'm dead! My daughter isn't crying at all! It seems that she's mad at the police for saying that I committed suicide! I didn't commit suicide! I'm a foolish father but I wouldn't deliberately kill myself and leave my 19-year-old daughter all alone in this world! I need to talk to my daughter. I need to tell her all the things I never got to say to her! I'll make any kind of sacrifices to meet my daughter again!"