Which Star are you from 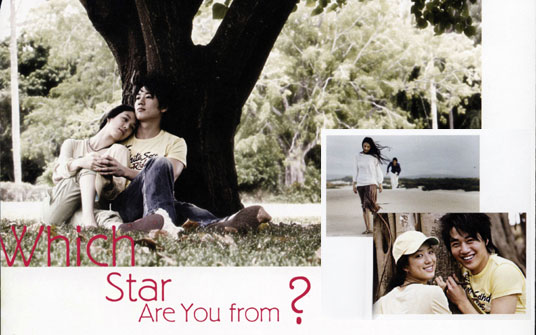 For MBC Wallpaper from this drama : http://imbc.com/broad/tv/drama/byul/wallpaper/

For MBC Photo Gallery from this drama : http://imbc.com/broad/tv/drama/byul/photo/
Brief Synopsis

A countryside girl who grew up on a hillside village in Kangwon-do is later found out to be the daughter of a rich family in Kangnam. How lucky! Overnight she has realized every person's fantasy. But is she really happy? Is she truthfully happy? The goal of this drama is to show how characters that seem like they would never be able to truly communicate with each other start to look at the world from inside the other person's shoes; the process of how they face difficulties with each other but learn to understand and communicate; the process of how they heal their pain and find themselves. And finally of how they discover in a fun and touching way that everyone in the world, including themselves, can be a hero. Whether you have a lot or not, whether you had a great education or not, whether you're old or young, whether you have found true love or not...life can still be so lonely and tiring. Becoming an adult means opening yourself to others by finding out that life's lonely journey isn't only about you. Those who know this are the ones that can taste the true happiness of love. In the end, everyone's happiness comes from within their own heart. Our wish is that all people living in this desolate and gray civilization will be able to feel true warmth and happiness spreading through their hearts.

A scenario writer and movie director; a transfer student at the Australia Film Academy who majored in film producing, his first short film wins an award at a world film festival and he becomes the new shining star, but while everything is going so well, he suddenly encounters a tragic loss: the sudden death of his lover. The accident happened in the blink of an eye. The car he was driving was involved in a collision with a truck and although he survived it, his girlfriend unfortunately wasn't able to. After her death he stopped all his work and hid from the world for 3 years. However, when his life seems to have hit its lowest point something weird happens. A girl who looks exactly like his ex-girlfriend appears in front of him. She looks exactly like Hye-soo but is a total different person. She is not just different, but different to the extreme. Hye-soo was kind and elegant, while this girl is ignorant, fearless, and looks like a total country girl. But the funny this is that he freezes when he is around her. Her name is Kim Bok-shil. Spending time with this girl he starts to become a lamb and a spring wind starts to blow and melt his frozen heart. He realizes the real meaning of true courage. He also starts to realize the he is a precious person, that he can make someone else happy and that he hasn't lost everything in the world so he doesn't have to be scared of anything.And so he changed. Now he can meet other people comfortably and confront them truthfully; he has started to come out of his dark past. Now the only thing left is to tell her how he feels about her. Please accept my burning heart.But... it turns out that she is Hye-soo's long-lost little sister. Out of all the terrible trials he has been through this one is the toughest.

She lives in the backwoods on the borders of the Taebaek Mountains in Kangwon-do, a girl who grew up on the mountain hillsides in a little village where the entire population is barely 30 people, and getting to the nearest town takes several hours on a winding road. She lives buried in the hillsides with her mom, whose mental age is stuck at 10 because of a coal gas accident, and without a father, but with her strong mind and powerful personality, she makes it through day-to-day, thanks mainly to her positive attitude toward life. In her imagination she has become a singer, a news reporter, a teacher, a man, and a foreigner. Her one dream is to go Cheju-do, despite the fact that she hasn't even been to Seoul. To spread her dreams out a little more she would like to go to college and get a degree, and then become a stunning and smart business women. She would commute every morning and make a lot of money, then build a house where she can live with her mom forever.But as of right now all these things are just a distant dream. Just when she starts to think that she is going to live on this hillside for rest of her life and is about to throw away all her dreams, her life takes a sudden turn when she meets Seung-hee.

Seung-hee's high school senior; the grandson of the man who set up the historic publishing company Hee Moon Gak. A year ago his grandfather died from a stroke and left him with the ownership of the company. He displays a humble and polite character due to the fact that he was brought up very well by his parents. He is a character who is very gentle in appearance but sturdy in spirit, but once you get to know him you realize that once he sets a goal he is very tenacious in achieving it and he has a strong will to win. After the people in the publishing company worked with him and got to know him, the bad rumors about him started to die down. In order to find Seung-hee, who has been shutting out the world, he finally finds his way to a little village on the hillside and there he meets a young woman. Suddenly this girl, who looks exactly like Hye-soo tells him, You're so cocky! causing his nice looking face to harden. At first he was kind to this country girl to be polite, even though in his mind he looked down on her. She, for her part, keeps reading his mind and embarrassing him yet strangely his heart keeps beating towards her. He can't understand his own heart and why it keeps beating towards this country girl who only graduated high school and lives with a dumb mom. Then one day, he feels that she just might be Lee's daughter!

Lee's granddaughter and Bok-shil's cousin; she is currently a movie music director. She got that spot on her own, without any help from her wealthy grandfather, through her own abilities, a fact she is very proud of.When Hye-soo came to the States to study they were like sisters. Hye-soo, Seung-hee, and she spend a lot of time together but one day she realizes that she is starting to like Seung-hee. Then one day Hye-soo dies in an accident and from that day on she was unable to get any closer to Seung-hee.She goes with Jeong-hoon to find Seung-hoon and is surprised when she sees Seung-hee with Hye-soo, who died several years ago!

Which star are you from trailer