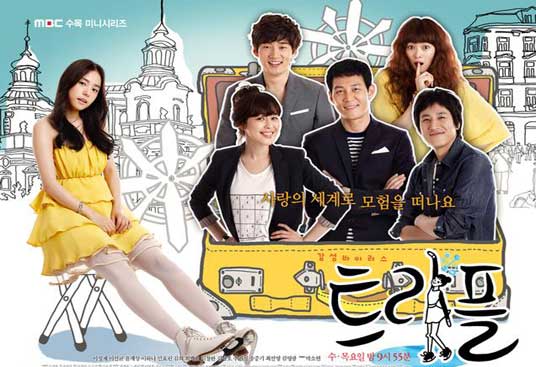 Also known as: Love on ice

Triple is the story of one lovely female figure skater and three charming gentlemen in the advertising industry, all living under the same roof. One of the main motifs of the drama, figure skating, is widely popular in both Korea and Japan. Hence the drama drew a lot of attention even before its production officially began.

Min Hyo-rin, a singer and a model, stars as the young heroine, Lee Ha-ru. Min will delightfully portray how the 18-year-old girl's heart is torn between two men.

For leading actors, Lee Sun-gyun of (Coffee Prince) appears as Cho Hae-yoon, the stepbrother of the heroine, Lee Ha-ru. Cho Hae-yoon is a creative director of an ad agency, a man of truly gentle and kind manners.

On the other hand, Lee Jung-jae takes the role of fussy but talented and charismatic Shin Hwal, drawing a vivid contrast with Lee Sun-gyun's gentle character. The last leading actor is Yoon Gye-sang of the famous boy band, GOD. Yoon stars as the stylish and gorgeous Jang Hyun-tae, who becomes anguished as he falls in love with his friend's wife.

The portrayal of sweet love on snowy white ice by "Triple" will hopefully bring refreshing moist to the audience's heart this early summer.