The Next ( Rebirth Next ) 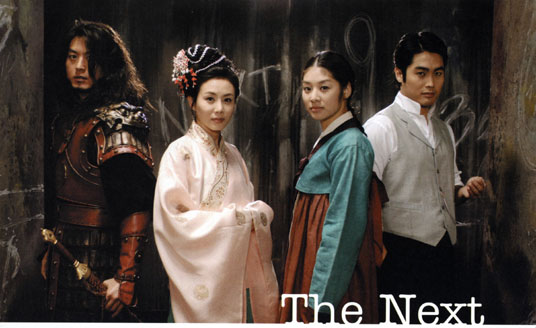 
A stage trouper, Kang Jung-hwa, who was troubled with insomnia, receives hypnotic therapy from her psychiatrist, Lee Soo-hyun, and experiences love in a previous life. Next draws out the incomplete love relationships that the four main characters are having and have had. (Think in different time periods). Min Ki-soo is Kang Jung-hwa’s modern boyfriend, Min Ki-bum is Lee Soo-hyun's modern boyfriend. Min Ki-soo’s past lives are of a general of the Joseon Dynasty and of a freedom fighter during the imperialist Japan. There will be four different previous time periods the two men and women have shared their love in and will show how they were all destined to meet each other.Misfortunate fate… Are we going to meet each other again in the next life?Here are the unfortunate lovers who reincarnate at different times and keep meeting again and again. Their karma reflects your own life and love. Their hopeless loves over a thousand years reveals a heartbreaking love story.Meeting each other in the next life is a privilege allowed only to those who do their best in their love in this life. Are we trying hard enough not to have any regrets in the next life? This is the story of lovers who meet each other in different lives and in different times. You will witness their hard efforts to keep their promises to love each other forever.- come to this world, - going back. What if the fact that I was born, I live and I always fail at love repeats over the thousands years in different places and at different times? What if birth and death are only entering and leaving the stage? Then, my goal in this life is cutting off that vicious cycle in my painful life.

She's a psychiatrist. She's going out with Ki-beom at the moment and they will get married soon. She believes that things like former life and fate are man-made illusions. She doesn't believe in anything that can't be logically explained. It's OK if Ki-beom chose that woman over her. She thinks it's up to him to decide. However, it does hurt her pride.

She's working as a waitress during the day and plays music at night. She's been going out with a singer, but she feels an unexplainable attraction to Ki-beom when she first sees him. She believes in fate and she thinks she should accept it. She believes that she's lucky to find Ki-beom since not everyone finds their destiny in life. It's not easy to meet the person you are meant to be with.

He's a surgeon and Ki-soo's older brother. He used to be a calm and reasonable man, but since he met Jeong-hwa he's fallen into a passionate love. He's smart and cynical. He doesn't care about things like fate or karma. He doesn't want anything to do with those things. He believes that his life completely depends on him, and everything can be different depending on from where you are looking. For Soo-hyeon, Jeong-hwa is a woman who steals someone else's man, but for Jeong-hwa, Soo-hyeon is just an annoying ex-girlfriend.

He's a play actor and Ki-beom's younger brother. He's passionate, but insensitive. He must be the biggest victim in this tangled relationship. Whatever Jeong-hwa's fate, he'll marry her. He explodes out of anger and obsession. The only excuse he can accept from his brother will be that he didn't know about his relationship with Jeong-hwa.