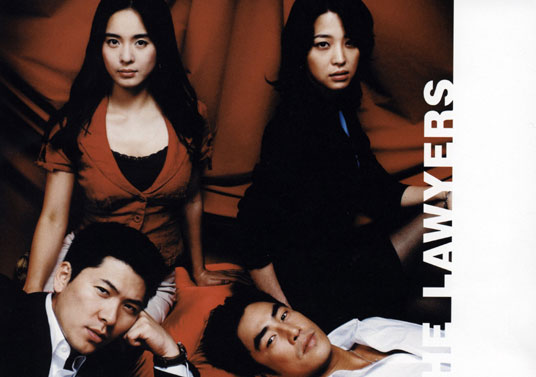 Life is a series of multiple choices.You sometimes find yourself standing at the fork of a road, which forces you to make a choice. Whether the decision is wise or not, it can be a major turning point in your life. A single choice can lead some's life in a completely different direction. This notion is what The Lawyers wants to portray.

A Two-Faced Monster Named 'Choice'To be or not to be...You face many different choices over the course of your life. Sometimes they can be something so important to decide life or death; sometimes they're trivial choices, such as deciding what to eat for lunch. Even in a single day, you run into many occasions that you have to choose one over the other. Now, the person you love asks you to choose between love and ambition. You're confused since you're aware that you must stay the course whatever you choose.

The Moment of Naked Truth There's a secretary working at a law firm and a honest and experienced lawyer. Her ex-boyfriend who has turned into an evil man gets involved in the case they're working on. It's becoming a tug of war between desire and reason. They ask themselves. 'What do I really want?' 'True love? Or satisfy my ambition?' At the moment they make a decision, they take a irrevocable step, which they will remember for the rest of their lives. They get more and more honest about the way they really feel.

Loving someone is like showing your true self and waiting to be judged. Whatever costume you wear, you can't disguise your true self when you're in love.This drama portrays the conflicting lovers who must decide between love and ambition.

She's working at a law firm as a secretary.Nickname: Silly gooseShe doesn' t want much from her life. She's just grateful for the fact she has a place to live and food to eat. She's always smiling. She never tries to find the easy way out. She always does what she's told without complaining. She's not very interested in clothes or makeup. She's usually very calm and quiet. However, when she runs into her ex-boyfriend, her hidden anger and hatred stir. She had to quit music school. Her biggest task for now is making money for her sister's surgery. She tries to hide her feelings. The man she has in mind is the lawyer who got her the job. His name is Seo Jeong-ho. At first, she was just grateful for him, but it turns into love. However, he's married and she knows she's not supposed to show her feelings. She expresses her love by being loyal to him as his secretary. Her parents were both doctors. They used to run a little clinic and an orphanage. She used to have a boyfriend from that orphanage. Her parents didn't care about his background. Her family used to live happily and comfortably. However, everything seems like a dream.

He's a lawyer who used to be a prosecutor.Sometimes he disappears for days. Sometimes he comes to work looking like he just woke up and talks about crazy things. Sometimes he confuses his clients by talking to them as if he still were a prosecutor. Sometimes he's a pain in the neck for his boss and colleagues. However, there's a reason for his unusual behavior. He was fired while he was investigating a slush fund case. However, he's still working on this case by himself collecting evidence. That's the reason why he's so absent-minded. He personally has a lot to complain about at the law firm. He relies on Ju-hee both in personal life and business. He can't even remember his wife's birthday without Ju-hee's help. One day, an American law firm dispatches a lawyer and he asks him to release the file related to the slush fund case. He strongly refuses the request, which causes extreme conflict between them.

He's Seo Jeong-ho's opponent. After leaving Ju-hee, he turns into a shameless and mean person. He allows himself to sink into vice. He knows that he's started doing wrong, but it seems irrevocable to him. He almost feels that he's addicted to acts of evil. It seems that his life is going to end if he steps off that path. When he passed the Bar Exam, he was very hopeful about his future dreaming of a happy life. However, at the moment he failed to refuse an evil proposal, everything changed. He works at a big law firm in Manhattan and handles a client who has built up a slush fund. He comes back to Korea to take care of the case. He runs into Ju-hee at Jeong-ho's office. He has mixed feelings every time he sees Jeong-ho. He thinks that he could have been a good lawyer who fights for justice, like Jeong-ho, if he stayed in Korea. It makes him sad. At the same time, it makes him meaner. He tries to believe that it is what makes him different and special.

She's a beautiful secretary.She's tall and beautiful. She's not happy that her salary is much smaller than the lawyers. She's sick and tired of her boss's sexual harassment. To escape from her miserable life, she's trying to seduce a young lawyer. She bets everything on that. If it works, she doesn't need to play this game anymore. If it doesn't, she has nothing to lose. However, every time it fails at the last moment because of her humble background. One day, Yoon Seok-ki walks into her life. He's like a heartless monster. If he ever loves someone, it must be a real love. She wishes to be the one. Sometimes she helps him, sometimes she bothers him for some reason. She even plays around with another man as though she wants him to see. It's hard to guess what is really going on in her mind. Their relationship goes between love and hatred, back and forth.