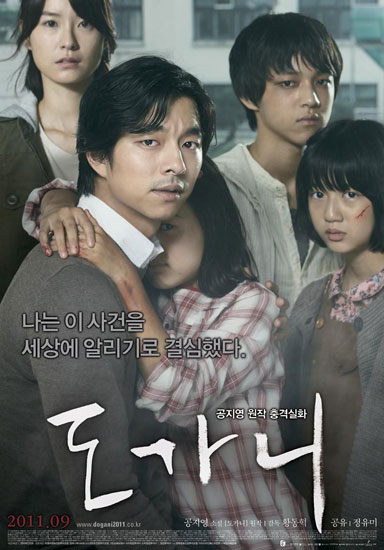 Based on the novel of the same name written by star author Gong Ji-young, "The Crucible" follows a group of children with disabilities who suffer physical and sexual abuse at the hands of their teachers.

Gong is one of a few star authors in Korea whose novels have sold more than a million copies. When her novel was published in June 2009, it became an instant hit not only because it was written by Gong but because it is based on a true story.

The film begins as Gang In-ho (Gong Yoo), who is working to earn money for his daughter's surgery, is appointed to a school for hearing-impaired children in Gwangju. But what he discovers there is an ugly truth: the children are being physically and sexually abused by their teachers. When he decides to fight for the children's rights and expose the crimes being committed at the school, In-ho teams up with human rights activist Seo Yu-jin (Jeong Yu-mi). But he and Yu-jin soon realize the school's principal and teachers, and even the police, prosecutors and churches in the community are actually trying to cover up the truth.

Director Hwang Dong-hyeok, who previously directed the 2007 hit film "My Father," has received rave reviews for turning a successful novel into a well-made motion picture.