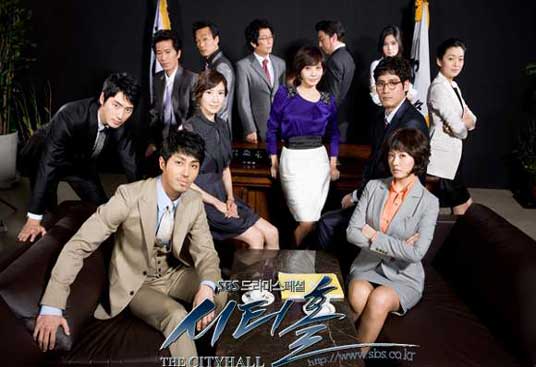 City Hall is a drama that will deal with politics in a romantic comedy genre. It's about the happenings between a young woman mayor and an elite bureaucrat. Jo Gook is an exceedingly smart government official. He passed the Higher Civil Service quickly, and basically is the perfect guy. But being a deputy mayor is not enough for him. He lives with the dream of becoming South Koreas President. He should have easily gone straight to the top, but due to an unexpected incident, he gets dispatched as a deputy mayor for a provincial small town, Inju City, where Shin Mi Rae was working. Shin Mi Rae is a low-ranking secretary in Inju, but she works her way up in becoming the youngest City Mayor. As their paths met, they have to deal with each other's personal and social differences. But despite their constant bickerings, would they end up in each other's arms?

The makers of hit dramas and some of Korea's favorite actors are getting together to bring the life, passion and love of public officials working at city hall.

Created by producer Sin Woo-cheol and writer Kim Eun-sook, who brought hit television series such as "Lovers in Paris" (2004), "Lovers in Prague" (2005) and "On Air" (2008), the new drama "THE CITY HALL" portrays the story of public officials working in a small town finding their way to success, plus a bit of romance along the way.

"We were not going for a political drama. We just wanted to talk about people, and a lot of them, and that's how we set the backdrop in a city hall. The drama will be about people we meet and see everyday", said the producer at a press conference held in Incheon.

Kim Seon-ah, 33, who played the quirky and lovable character Sam-soon in the hit drama "My Lovely Sam-soon", will appear as Shin Mi-rae, a low-ranking official who's been making coffee for her superiors for the last seven years. Her life takes a turn when she wins a pageant and later becomes the mayor. Her name literally means "the new future".

"Shin is the brightest, cutest and most lovable character I've ever portrayed. But, to be honest, it was also the hardest drama I've ever worked on. I was able to focus on acting only because my counterpart was so great", Kim, who surprised reporters with her slimmer figure, said.

"There was nothing particularly difficult, but it was hard to be hit in the head so many times", Cha said, laughing.

The 38-year-old actor has returned to the small screen after seven years as a smart and passionate official named Cho Guk, which means "home country", dreaming of becoming the next president. Expectations are naturally high.

"Of course I'm happy to be back. It's been a while but I think I've learned to release the stress of working on dramas. We have so many talented actors, and it really means a lot to be working with them happily for this series", he said.

Famous for their comic characters, the two actors will be able to show their funny sides, as the writer herself said that the soap was going to be her funniest work.

"This drama is really a romantic comedy. I had a difficult time understanding the true meaning of humor in the past, but I've finally overcome my difficulty", Kim said, smiling.

Known for her quick and catchy lines in her previous dramas, starring top actresses such as Kim Jung-eun (Lovers in Paris) and Kim Ha-neul (On Air), the writer said that she always left some space for the actors to fill in themselves.

"When they have a space within the script where they can experiment, it really makes a difference. The script for this drama also offers that and both Kim and Cha said they were thrilled", she added.

Despite the colorful characters and the catchy names, the title "THE CITY HALL" still begs the image of a political drama, and both the producer and writer made sure that they made their points clear.

"Politics just happened to appear because of the backdrop. But that's not what the series is about. I wanted to show our ideals: ideal mayors, politicians and public officials as ordinary people, just like us", Kim said.