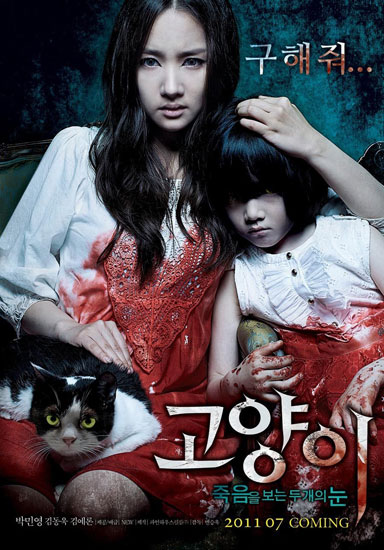 An unlikely protagonist slinks around in "The Cat", which follows So-yeon (Park Min-yeong), a pet groomer who suffers from claustrophobia stemming from a childhood experience.

One day, one of So-yeon's customers dies on the elevator, leaving her cat Bi-dan behind. The mystery of who killed the woman on the elevator is unknown, and the cat is the only witness. As the police begin their investigation, they ask So-yeon to take care of Bi-dan. But something strange happens to So-yeon from the day she brings Bi-dan home.

So-yeon starts having nightmares in which she sees a little girl who keeps coming back to haunt her dreams. Afraid and unsure of what this might mean, So-yeon starts investigating the mystery of the cat and the death of its owner when her closest friend, who has also recently gotten a cat, dies.

The film was invited to participate in the 64th Cannes Film Festival Film Market, where its distribution rights were sold to three companies in Singapore, Malaysia and Brunei.

Critics at Cannes said that the movie is scary yet fascinating and ultimately appealing.