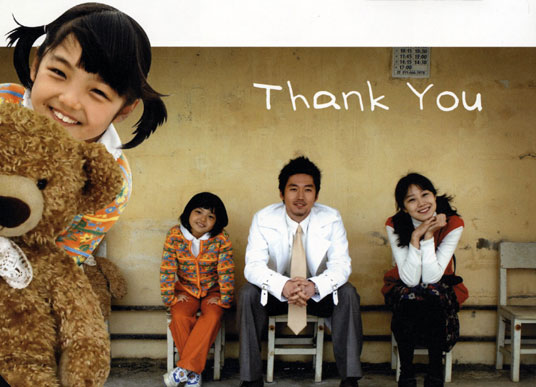 For MBC Wallpaper from this drama : http://www.imbc.com/broad/tv/drama/thankyou/wallpaper/index.html

Are you a gangster that kills or a doctor that saves lives? My father always said, 'Don't focus on the disease, focus on the patient.'Though dedicated as Hippocrates himself, my father was destroyed by his patient's betrayal.So I never focus on the patient. Just on the disease... Then Ji-min, my beautiful angel with a heart of gold, whom I did't really deserve, died in my arms. People called me the biggest jerk of all times. And I really was...Until I went to that island...

I'm young, ignorant and poor. Sometimes I want to be babied by my parents and my boyfriend. I often cry and I'm so weak that the wind could knock me down. But mothers are strong and I'm a mother now. I'm the mother of a child with terrifying disease called AIDS.

Will you marry me in 20 years if I'm still alive, Doctor? I'm so excited that my dream guy is boarding at my house! Hurray...I threw out all my posters of Park Ji-sung after I met the ever-so-cool Mr. Gi-suh. And I'm totally over Yong-joo, who's in third grade.Anyway, my mom's so pretty but I don't look like her at all. Maybe I was adopted. I really want to know who my dad is but I'm trying not to ask because it might hurt mom's feelings.

Thank you for reminding me how beautiful Young-shin is, Mr. Min.Young-shin clearly said, 'Bom is not Suk-hyun's child.'But Bom probably is my kid. I know how pure and innocent Young-shin is. But I just said, 'The heck with it.'That was until Min Gi-suh, the heir of the company that I work for, gazed at Young-shin with such love in his eyes. I realized how beautiful she is when I looked at her again through Gi-suh's eyes.I can't lose her to Gi-suh. Young-shin and I have a child together, Bom!

I'm not a grandpa. I'm Mr.Lee Young-shin's grandfather and Bom's great grandfather.In his youth, he was a bandmaster in a cabaret in Daejeon.Diagnosed with Alzheimer's after his son and daughter-in-law went missing in a storm, his memories often take him back to his band days. He calls Young-shin, 'Pretty gal' and calls Bom, 'Pumpkin.'If anyone calls him Grandpa instead of Mr. Lee, he gets extremely upset. So everyone in the village calls him Mr. Lee.