Thank you my Life 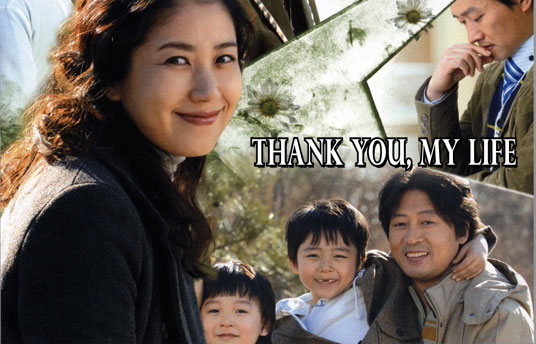 For KBS Photo Gallery from this drama : http://www.kbs.co.kr/drama/thankslife/media/gallery/index.html
Brief Synopsis

A successful professional woman, Yeon-kyung grew up in a poor family and had to earn her college tuition fees on her own. She is also a good mother to her two children and a good wife to her always-busy husband, a photojournalist. One day she runs into her first love, In-seok, at a hospital that she visits for a medical checkup. Her passionate feelings toward In-seok rush back to her, but she also finds out that she has cancer.

She faces a tough decision of whether to stay with her husband or choose In-seok, while also battling cancer. The series' characters look familiar and the plot appears to have many cliches at first glance, but the way the story unfolds stands out from other TV dramas. Unlike other series, in which cancer-stricken characters almost always die, this series shows its main character eventually win the battle with the disease. What also makes this series stand out is the scenes showing strong family ties, interesting episodes taking place in the hospital, and love stories of other characters.

An executive at a PR company, a mother of two kindergarten children and a wife of a photojournalist, Yeon-kyung became who she is today with her own efforts. She is a highly recognized professional at work and a diligent housewife at home. While at a hospital for a medical checkup, she runs into her first love, In-seok, a doctor, who tells her that she has cancer.

Kang Yun-ho: A constantly busy photojournalist, Yun-ho rarely cares to help his wife with household chores, even when he has free time. This indiscreet guy even buys an expensive camera secretly from his frugal wife, who does her best to save money to pay off their mortgage. A pure-hearted person deep down, Yun-ho is devastated to learn about his wife's disease and shocked to discover that the doctor taking good care of his wife at the hospital is her first love.

A good-looking and talented doctor, In-seok is an outgoing guy who likes to exercise and have fun, but never reveals his feelings to others. He strongly resents his father for abandoning his mother, who later died of liver cancer. His feelings for his first love, Yeon-kyung, rush back when he encounters her at his hospital

A famous TV anchor and a married man, Jin-soo looks warm-hearted and nice on the outside, but is in fact selfish, ambitious and tightly controls his feelings. Currently working as a PR director for the Association of Children Cancer, he falls for a hospital resident Yun-seo and asks her out.

Choi Yun-seo: A colleague of In-seok's, Yun-seo is a smart woman notorious for her obstinacy. She married at the tender age of 20 but got divorced in just a year, and enrolled in college, strongly determined to become a doctor. However, she feels lonesome and first appears indifferent to Jin-soo’s attraction to her but gradually opens up her heart to him.