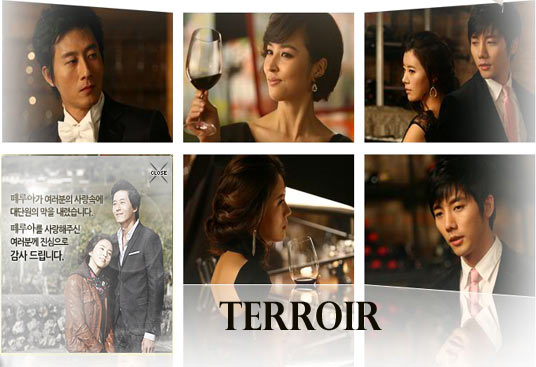 Tae-min is (Kim Joo-hyeok) uncle loves wine and wanted to become a wine master but had to take over his brother is s company - Hangang Construction after his death. When he finds out that Tae-min likes wine too, he lets Tae-min take it up as a profession. When Tae-min was young, his uncle took him to France and let him explore himself in the world of wines. It's there that he met Ji-seon (Yoo Seon), who was adopted as a baby, and Tae-min feels his wounds healing with the help of Ji-seon and the wine. One day, Tae-min leaves for Bordeaux, France to grant the long-cherished wishes of Mir Trading President Yang Seung-geol and his uncle who is now in the final stages of his cancer. Their wish is to taste the 1945 bottle of Chateau Mouton Mayer. Meanwhile, Lee Woo-ju raised by her grandparents in a traditional Korean winery called Nancho, decides to leave for France after her boyfriend studying abroad in France hasn't called her for a year. At last, Tae-min gets his hands on the wine, but the bottle ends up being switched with Woo-ju is raspberry wine.

Tae-min finds out later and does not know what to do. He is sitting next to Woo-ju on the plane but Woo-ju begins to think that he is a pervert. After he arrives in Korea, Tae-min honestly reveals that he lost the bottle. President Yang thinks that Tae-min is hiding the wine from him because his uncle wants it. He becomes suspicious of Tae-min from then on. After a while, Tae-min's uncle dies and Tae-min receives Nancho, a Korean winery, from his uncle's will. Thinking that he'd like to transform it into a wine restaurant, Tae-min's asks Woo-ju and her grandparents to move out. Woo-ju's grandfather has gone back to the country and Woo-ju secures a job by asking Tae-min to use Nancho's employees as workers for his new restaurant. Tae-min opens up his new restaurant, Terroir, but is unable to buy any wine when President Yang gets in his way. Woo-ju constantly bickers with Tae-min as she works in the restaurant. She gets acquainted with Joy Park (Gi Tae-young) as well. Then one day, she finds out that her raspberry wine has been switched with Tae-min is wine and finds out from a wine magazine that the bottle is worth over $100,000

- The setting of the drama takes place in Bordeaux, France.

- Filming began in September 2008 which coincided with the grape harvest and wine production in France.

- This is the first korean drama all about wine.

- The production cost is about $6 billion won ($6 million USD) and the drama has been prepared for over 2 years.