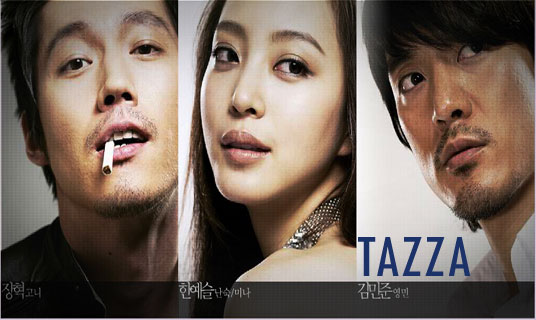 The drama's formula to success lies in a revamped storyline, an infusion of humor and a brand new character. Planning to capitalize on the riveting tale of a skilled cardsharp -- or "Tazza" in Korean -- named Goni, the bare bones of the plot remains intact, with favorite characters Madame Jung and Ah Gwi still in the script.

Cardsharp Young-min, played by actor Kim Min-joon, will stir things up, radically changing the structure of the story. "This character is not in the original version", said the 32-year old actor at the press conference held last week, who likened Young-min to villain Anakin Skywalker a.k.a. Darth Vader from "Star Wars".

Kim, who won women over in SBS' "Lovers in Praha" (2005), takes on the complex role of a high school dropout and close friend of Goni. Attempting to raise money to pay for his grandmother's surgery, he ends up losing at a round of "hwatu" -- an Asian card game -- and crosses over to the dark side, learning the tricks of the trade from top cardsharp Ah Gwi.

Actor Jang Hyeok will be joining in on the game as Goni. Having showcased his mastery of the art of mixing comedy with action as a wannabe thug in the flick "Jungle Juice" (2002), the 31-year old actor promises to draw laughs.

"I created my own new character", said Jang at the press conference.

Unlike Jo Seung-woo's artful portrayal of Goni in the movie, which was serious, dark and sharp, Jang's hero is bright, outgoing and downright funny, relying on street smarts and talent rather than a suave demeanor to get him out of trouble. Even the way Jang runs is very Chaplin-esque, making him perfect for a TV version, which needs to keep things rated PG.

"I received gambling lessons", said Jang, who admits that in real life he would make a terrible cardsharp. "My teacher told me I did not have a money-making face. A tazza's face needs to be ordinary, unnoticeable".

Though Jang may not have the face of a pro, he is excited to prove to audiences that he can take on the role. And so is actress Kang Seong-yeon.

Well aware that she has some big shoes to fill as femme fatale Madame Jung, Kang remained confident that her interpretation of the character would be radically different.

"Actress Kim Hye-soo left such a strong impression as Madame Jung in the movie, but the drama is different", said the 32-year old actress. "I will be showing her human side, making her someone that people can relate to".

Another actress will be trying her luck at gambling in the drama version as Goni's childhood sweetheart, Young Min's first love and Madame Jung's apprentice. Han Ye-seul, who rose to fame in the hit drama "Fantastic Couple" (2006), is taking on the crucial role.

Veteran actor Kim Kap-soo will be playing the ruthless cardsharp Ah Gwi, while actor Son Hyeon-joo will be bringing in the laughs as Goni's sidekick, Go Gwang-ryul.