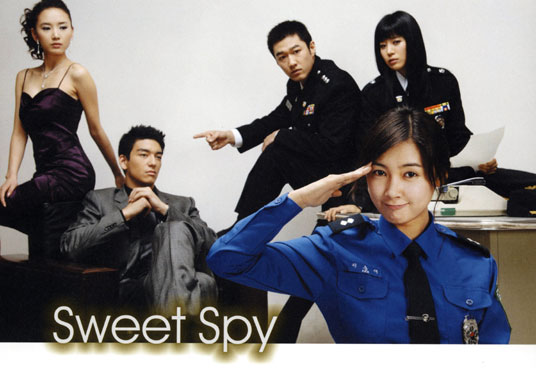 For MBC Wallpaper from this drama : http://imbc.com/broad/tv/drama/spy/wallpaper/

For MBC Photo Gallery from this drama : http://www.imbc.com/broad/tv/drama/spy/photogallery/index.html
Brief Synopsis

What is the moral level of Korea in the 21st century? Is this society one where common sense is still valid? A country where just because of the fact that some officials are elected candidates they think they can get away with bribery and large-scale wiretappings initiated by National Institutions. Who are our people supposed to trust? A weak traffic police Lee Soon Ae. Let's hope that she will soothe our surging anger.

About the time that Soon Ae was about to graduate high school her father's print shop was not doing very well. They were barely making enough to scrape by. So as soon as she graduated she went out to help make money for the family. She married a young police officer, Kim Minook, but shortly after their marriage he died in a questionable car accident. Soon Ae ends up becoming a special recruit police officer but soon finds that making a living on her own is not too easy. After accidentally stepping on the edge of the First Lady’s skirt she gets moved to a neighborhood public security center where she gets harassed by drunks, goes around looking for runaway teens, and get bruises here and there trying to help solve domestic disputes. She has a very troublesome life but she works very hard never to forget her duties as a police officer.

He is a very hard worker; studying and working at the same time he makes it into the police college. This guarantees him a secure future and also exempts him from paying tuition. He graduates with exemplary grades and stands out among his classmates with his outstanding skills in solving cases which gets him promoted as a police captain early on in his career. He is a very lonely person who is frighteningly cold-hearted, doesn't let his feelings be shown nor does he let others come into his heart. But one day he meets the troublemaker police officer Soon Ae who starts to melt his heart.

She is born the eldest of a family from which many of Korea's best police officers were born. As a child she got all sorts of special education and was brought up not knowing any hardships. She is the most intelligent and talented woman ever to graduate from the police college. It’s hard to believe that her feelings toward Kang June are truly love but one thing for sure is that she can not let someone take the most popular and best officer away from her. But just when she thought Kang June was all hers his heart starts to move toward the preposterous Lee Soon Ae! Just watching her going ahead and solving cases before any orders come down from the investigators stirs up great hatred inside Eun Joo's heart. Eun Joo becomes more of a wicked character as she rebukes each and every case Soon Ae is involved in to Kang Jun and even puts her into great danger. Soon after, Eun Joo herself gets into a great accident.

A character with an unknown identity who has nothing but money suddenly appears out of nowhere as a person who has great funding powers from a non-banking sector. There are many rumors going around about him because everything about him, starting from where he was brought up and what he did in the past, is hidden. He can speak English, Japanese, French, German, Russian and 2 third world languages, and he has information about anyone he needs to know about. His one and only hobby is boxing till he sweats, and this, after coming back from trips to Tokyo, Singapore, and Hong Kong. As the curiosity grows of what actually is behind the curtains of this great spotlight, fame, wealth and soft smile, he meets Soon Ae again, after getting a speeding ticket, at a sparring ring. After seeing her again a little fire of love lights his dim heart. What is his real identity?...

The tough guy in the investigating department.A hot tempered officer whose fist goes out first to criminals but sucks up to senior officers.

Lost his parents in the Korean war and grew up with hunger and extreme sadness. Once a born fighter with nothing but guts and integrity, he ends up living in jail for getting in a fight with a few who betrayed him. Now he's just a plain old man living with one of his followers from the old days who owns a boxing gym on the outskirts of town. Although he has no money, power or place to go his temper from the old days comes out but when thinks of the days when he was in prison and his wife who took his children and left him he cries lonely tears. He acts all smart in front of his followers using English words that he heard when he used to work as a shoe-shiner at the American Army Base.

He starts boxing at an early age, determined that he was going to become rich and help his family. He becomes an amateur boxer during his junior high years and gets his name known. Then he gets involved in a fight because of a friend and gets kicked out of school for it and then his life starts to fall apart. After he gets kicked out of school he does everything to make money, no matter what the job is. While working as a waiter at a nightclub he comes into the eye of the owner and becomes the second man of the Bong Goo Gang. He goes to prison after fighting with some new gangs and gets out of prison before the boss. After he gets out, he lives awaiting and dreaming of the boss's comeback.

He looks down on ignorant Wang Sah Bahl and is always looking for a way to take his place as the second man but never succeeds because of Wang Sah Bahl's various tactics. He thinks himself to be a smart man and always uses his head but always loses against Wang Sah Bahl who throws punches before anything else. The day that Buhm Goo and Sah Bal get arrested he runs away by himself to some island but gets caught by the notorious shrimp catchers. They drag him all over the Pacific. Somehow he manages to get away but gets tricked by some other shipmen. He loses all his money and gets thrown off the boat onto some island where he marries a rich widow and eventually returns to Korea. But thanks to his bad luck he runs into Wang Sah Bal and is taken to pay the price of betrayal and now lives washing the floors of the gym and selling porn videos in the streets of Chungae Chun.