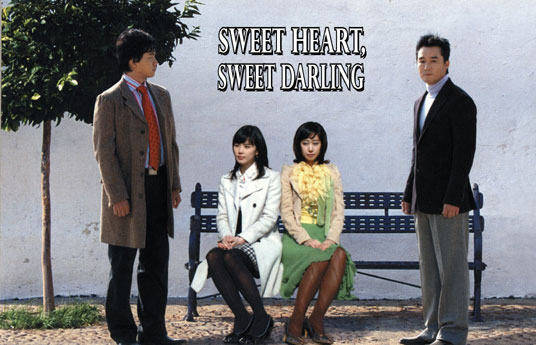 For KBS Photo Gallery from this drama : http://www.kbs.co.kr/drama/mysweetheart/broad/photo/photo.html
Brief Synopsis

This drama portrays the various ways of loving of seven guys and girls through a story that revolves around a man and a woman who used to be elementary school classmates. In-young (Lee Bo-young) accidentally runs into her elementary school classmate Ki-jun (Kim Seung-soo) after so many years, and the two tie the knot despite their parents' protests. But after failing to get pregnant even after three years of marriage, In-young faces a divorce. The situation escalates when Jae-min, an executive of a publishing company and a widower, shows interest in In-young, and a girl named Hee-joo, who has had a crush on Ki-jun since childhood, shows up. While In-young and Ki-jun attempt to make their new relationships work, In-young becomes pregnant out of the blue as she continues to see Ki-jun even after the divorce. To make things worse, In-young's younger brother, In-chul, gets embroiled in a love triangle involving his sister's friend Seon-mi and the girl named Mi-jeong, whom he dated while serving in the army.

Yoo In-young:In-young tries to come to terms with her life as she shuttles between her ex-husband, Ki-jun, and her new love interest, Jae-min. She matures through the conflicts with her mother-in-law and the pain of a divorce.

Kim Ki-jun: The son of a rich widowed mother and the only son for the third generation in his family, Ki-jun turns down the woman that his mother chose for him and marries his elementary school classmate after lying that she is pregnant. But he ends up in divorce because of his wife's infertility.

Jeong Jae-min: An executive of a publishing company and a father of a little boy, Jae-min, who has lost his wife to cancer, marries In-young, who has divorced Ki-jun because of her infertility.

Yoo In-chul: The younger brother of In-young's and a troublemaker, In-chul is a jobless young man who has just been discharged from his military service. His troubles begin when his former ex-girlfriend, a restaurant waitress whom he dated while serving in the army, shows up one day saying she is pregnant with his child and refuses to leave.