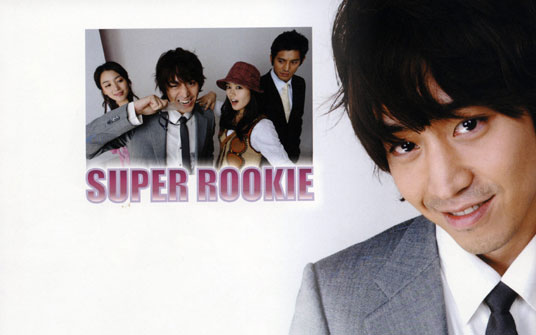 This is a smartly done comic drama that gives hope and courage to young people going through difficult times. Super Rookie is a story of a man who gets a job in a big company because of a computer error. The drama reveals his work, love and passions in life in a very interesting way. Our hero Kang Ho doesn't have a family background that makes him stand out among the crowd, but he has plenty of friends who will stand up for him. He never gets discouraged despite all of life's difficulties. Kang Ho's high spirits and Mi-ok's efforts to improve her life give today's younger generation a chance to look at their own lives and ponder what's truly valuable.

He was born into an average family. Even though all his parents want from him was for him to be an A student, he seems talented in many areas other than in academics. His athletic talents were noticed when he was an elementary school student. The various sports teams at his schools offered him a chance to play all kinds of sports, but he got tired of their hard and violent training methods, so he always called it quits. He managed to go to a small and unknown college and majored in physical education. It took him twice as long as normal to get his degree since he spent more time playing pool and dancing in the clubs. He sends his resumes to almost all the companies around, but he isn't called in for a single interview. Being a freeloader, he doesn't mind buttering up his little brother to get some pocket money. However, he never feels bad about his situation and always keeps his spirits high. He spends his days reading comic books at his friend's comic book store. Sometimes, he makes up his mind and sends out resumes to prove to his family that he's not going to be freeloader for the rest of his life, nonetheless his family doesn't expect much from him. He was once popular with the girls thanks to his handsome appearance and athletic talents, but now he can't even afford to take a girl out for a cup of coffee. He runs into his high school friend, Bong-Sam and happens to apply for a job in the company where his friend is working. His life is about to turn upside down thanks to some mistakes.

She was born into a poor family. Her mother raised her by working as a maid. Being a smart child, she learned at an early age how to take care of herself as well as how to do housework by helping her mother. By the time she finished elementary school, her mother fell ill and they moved to her mother's hometown. She helped her mother make a living at which time she couldn't even afford to go to middle school. As soon as her mother got better, she resumed her studies and graduated from a commercial high school. Since she was such a hard-working and smart student, she got a job with the help of her school principle's recommendation. She met Bong-Sam who was working at the same company and fell in love with him. She and Bong-Sam had a serious relationship, but Bong-Sam left her and was transferred to an overseas branch office. Since she didn't have a father when she grew up, she was more heartbroken when Bong-Sam left her. She went to the Han River to end her miserable life, but couldn't commit suicide because of Kang Ho. Working in the same company where she used to dream of a future with Bong-Sam is very hard for her, but she doesn't have any other choice. She just blames herself for trusting a man who didn't love her. One day, she finds out that Kang Ho, who saved her life, has started working in her company.

He seems to have it all. He has a good education and a sense of humor. Because of his parents' divorce, he was raised by his grandmother. After his grandmother died, he was sent to live with his alcoholic father. He's a person of strong will. Despite his terrible childhood, he's building a successful life of his own. Since he knows that his mother abandoned her family for another man, he doesn't trust love and he refuses to make a commitment in a relationship. Ignoring the fact that his sick father lives in a small shed, he leads a decent life style in his own apartment.

She's never been a genius, but thanks to her parents' attention and investment, she studied abroad after graduating from a prestigious university in Korea. Since she's always been the center of the attention, she tends to be selfish. She went to the same university with Bong-Sam. Later, Bong-Sam leaves Mi-Ok for he