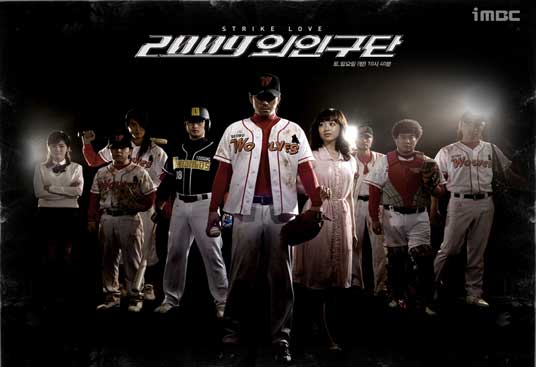 - First TV adaptation of Ultimate Baseball Team, a wildly popular comic book series that was published 26 years ago!
- Voted by netizens as the most wanted TV adaptation of an original story in a 2008 poll!
- A comic book hit about romance and sports that was also made into a cartoon series and full-featured movie with great success!

The Ultimate Baseball Team depicts an eclectic team of players who were kicked off of their respective team by their coaches. There is the former star pitcher who had his childhood girlfriend stolen from him by a bitter rival... Then there's the short, pudgy pitcher who is addicted to games while the captain of the team, a former street gang member, is a one-armed player. Another pitcher on the team is a 41-year-old veteran who was relegated to the bench during his entire professional career. The story interweaves a sad love story between a star pitcher and his sweetheart, who left him for another man, into the main plot about baseball.

He grew up poor and engaged in petty crimes to survive in the slums. Oh Hye-sung was introduced to baseball by Eom-ji, who was the new girl at his school and became his only friend. But she moved to another city and it was only when they were in high school did they get to meet each other again. But she was already dating Ma Dong-tak, a star baseball player, at the time. In Oh Hye-sung's professional debut, his team plays against Ma Dong-tak's team and he shines by pitching a perfect game. But he injures his arm in the process and the doctors tell him that he wont be able to throw another baseball. Then his father suddenly dies and he falls into despair as his life and career falls apart. One day, a man offers him a spot on a new professional baseball team. He accepts the offer and trains on an isolated island with other players for 4 years. In the meantime, Eom-ji marries Ma Dong-tak...

Possessing a kind and warm heart, she is a beautiful girl who attracts stares from men. She became friends with Hye-sung when she was younger and inspired him to become a baseball player. After moving to another city, she finally meets Hye-sung again as a teenager. She becomes pregnant with Hye-sung's baby but he suddenly goes missing. So she eventually marries Dong-tak who deeply cares for her. But then Hye-sung, whom she never though she'd see again, returns as a player on a new professional baseball team.

He is extremely competitive and has a natural talent in playing baseball. He had a crush on Eom-ji since he was a kid but at the time, Oh Hye-sung was Eom-ji's best friend. In both love and baseball, he is pitted against Oh Hye-sung as a rival. After Hye-sung suddenly goes missing, he comforts Eom-ji and treats her son like his own. Eom-ji is touched by his kindness and they get married but Hye-sung suddenly returns as a player on a professional team. As he sees Eom-ji emotionally distraught over the appearance of Hye-sung, he plays against Hye-sung's team to not only win but to also show Hye-sung that he will do whatever it takes to keep his marriage and family together.

Eom-ji's cute younger sister. She has a secret crush on Hye-sung. No matter how much she loves Hye-sung, he only has eyes for Eom-ji. This deeply disappoints her and makes her despair over her life.

Hye-sung's childhood buddy who is simple-minded and blunt. He grows into a big athlete with a powerful swing but since he had slow reflexes he was never chosen as a starter. Baek Doo-san played in the minor leagues with Hye-seong but after Hye-seong suffered a career-ending arm injury and was let go, he was also kicked off the team. He makes a comeback as a catcher playing with Hye-sung on the new professional team. With a quick mind and smart playing strategies, he becomes a key player on the team.

He was the leader of the youth gang that Hye-seung joined when he was younger. When Hye-sung stole money from the gang, he went after him but was blinded in one eye after Hye-sung threw a ball at his face. He constantly creates trouble in Hye-sung's life.