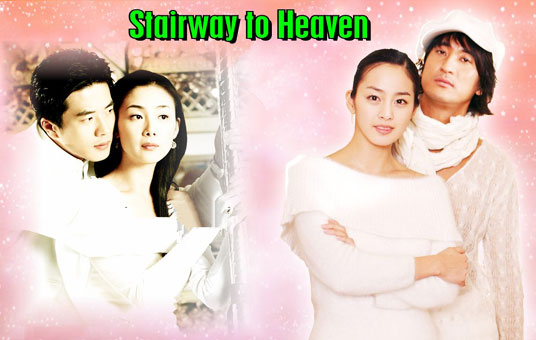 The first episode of Stairway to Heaven aired on February 5, 2004. A total of 20 episodes aired every Wednesday and Thursday night at 10 pm on SBS. This drama quickly became known as one that could bring on laughter and tears, pulling at viewer's heartstrings every time they watched. This TV miniseries was extremely well-received by audiences. Lead actress, Choi Ji-woo's immense popularity with young female audiences, along with a wonderful storyline has kept people talking long after the final episode aired.

Stairway to Heaven captured viewer's attention with passionate performances combined with movie-like qualities. Many viewers would be surprised to learn that the scenes of Han Tae-hwa as a child are actually played by Han yu-ri's real-life young brother.

Synopsis Song-ju (played by Kwon Sang-woo) and Jeong-seo (played by Choi Ji-woo) grew up together as close friends. Their parents close relationship gave them the feeling of being brother and sister as youngsters. As the only son of a wealthy executive of Global Group, Song-ju went abroad to study management. Before leaving, the two childhood friends exchanged necklaces.

After suddenly losing his wife to illness, Jeong-seo's father remarries Tae Mi-ra. For no reason Mi-ra's daughter Yu-ri seems to dislike Jeong-seo from the very beginning and is often cruel to her. During this time of cruel treatment, Jeong-seo is in a serious car accident, resulting in memory loss.

She remembers nothing of her childhood friend, Song-ju and is unexpectedly reunited with him. The four young main characters Cha Song-ju, Han Jeong-seo, Han Tae-hwa, and Han Yu-ri all have different ways of expressing love, making each character unique. The show incorporates the beauty and sadness of love set in beautiful filming locations with sweet, mellow tunes on the soundtrack.

Managing department stores, theme parks and more, Cha Song-ja's character is a skilled businessman. While his true love and talent lie in playing the piano, being the only son a top executive left no choice but to follow in his father's footsteps, leaving the piano merely as a hobby. Infatuated with Jeong-seo, he only plays for her.

The two have many similarities; both are left-handed, have the same blood type, and enjoy theme parks. Moreover, the two seem to have telepathy; when one is in pain the other also feels some kind of pain.

Han Jeong-su is the only daughter of Han Gyo-su, who is in the construction field. Jeong-seo has dreams of being a pianist, but ends up working at Global Group. Her mother died suddenly and her once simple yet happy home life became a distant memory.Circumstances beyond her control would lead her to hide her illness from others and continue to put others first, her kind-natured character always shining through. Difficulties at home with her stepmother and cruel treatment from her stepsister created an environment that made her bear the burden of her illness alone. Jeong-seo has a gentle exterior, but a tough spirit. She loves only Song-ju and waits for him.

Han Tae-hwa is Tae Mi-ra's son, Yu-ri's older brother, and most recently Jeong-seo's step- brother who is working as an artist. Tae-hwa takes little interest in others. His quiet, introverted nature adds to his mystique and makes his rugged appearance that much more attractive. He is highly self-conscious and has a tendency to approach a tough situation with a fist rather than with words, yet he is highly sympathetic.His life is filled with hatred towards the mother that abandoned him, Tae Mi-ra. He has the sad fortune of falling in love with Jeong-seo, who becomes the forbidden fruit as his stepsister.

As the daughter of Tae Mi-ri, sister of Tae-hwa and stepsister of Jeong-seo, Han yu-ri is working as a director at Global Group. She graduated with a master's degree in management from New York University. Yu-ri's charming and beautiful appearance mask this double-faced girl who is out to get what she wants at any cost.

She can't stand Jeong-seo, who is in the way of her getting the man that she wants, Song-ju. There is nothing stopping her evil nature.