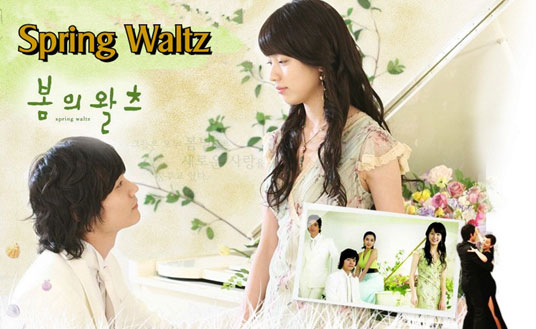 'Spring Waltz', the completion of the four season's series, succeeding 'Gyeoul Yeonga (Winter Sonata)', 'Gaeul Dongwha (Autumn in My Heart)', and 'Summer Scent' shows off its larger scale compared to the former dramas by going overseas to Austria. The producer, Yun Seok-Ho, who is famous for filming beautiful images, has created a gorgeous love story that hardly seems to exist in the world again in this series under the theme of innocent and beautiful love.

In 'Spring Waltz' in which fresh new actors are positively cast to create this ideal image of pure love, Daniel Henney who became a star of the first class in Korea through 'My Lovely Sam-Soon' and promising stars such as Han Hyo-Ju, Seo Do-Yeong, etc have appeared in this recent drama. Four young male and female characters eagerly desire love in their ironic fate, and the drama has reached its climax with the story line which is comparable to the producer's former dramas, but unlike the main characters from the former dramas, the heroine whose character seems quite familiar has made its audience become more and more attracted to the drama.

The secrets of the past have been revealed one by one, and the climax draws near. 'Spring Waltz' draws the passion, love, reconciliation, and understanding between a man and a woman who have shared the memories of their childhood together after they meet again as adults.

Eun-Yeong who lives with a single mother in a beautiful islet village is asked to take care of Su-Ho, the son of her mother’s male friend from her hometown. Su-Ho and Eun-Yeong live together and feel fraternal love, but Eun-Yeong who hasn't had good health since childhood comes to a critical point of losing her life if she does not have surgical operation. Because her family is extremely poor, they are incapable of paying high medical expenses for hospitalization and surgical treatment and face a dead-end situation. Luckily a man and his wife who wish to pay the medical expenses for Eun-Yeong appear in front of the family. They are the parents of Yun Jae-Ha who was in the same hospital as Eun-Yeong. They recently lost their only son, Jae-Ha, and want to pay Eun-Yeong's medical expenses on the condition that they adopt Su-Ho who looks exactly like their dead son. Su-Ho who wants to save Eun-Yeong's life leaves for Austria with them, and Eun-Yeong recovers completely.

However, Eun-Yeong's mother dies soon after, and Eun-Yeong becomes adopted as well and moves to Seoul. As a result, Su-Ho and Eun-Yeong live completely different lives.

Su-Ho who believes that he is the real Jae-Ha grows up to be a famous pianist and decides to come to Korea because of Ina's persuasion. Jae-Ha comes back to Korea with his manager, Phillip, and happens to meet Eun-Yeoung again. But, he is unable to remember Eun-Yeong because her family members and last name have been changed since she was adopted. In the mean time, Phillip has a favorable feeling toward Eun-Yeong who is naive and bright. He tries to be nice to her, but the language barrier between Phillip and Eun-Yeong who is not aware of Phillip's true heart disturbs their relation.

However, Eun-Yeong starts to feel concern for Jae-Ha even through he is eccentric and egoistic, and Jae-Ha also finds his affections drawn irresistibly toward Eun-Yeong. The ironic one-sided love between I-na who loves Jae-Ha and Phillip who loves Eun-Yeong are pictured in the beautiful islet village and Seoul.

He is a classical pianist of the next generation who has been closely watched with deep interests and concerns by Koreans since he won a prize in a famous concert. Even though he has grown up in a rich and enviable family under his father who is a diplomatic official, he is a lonely person having only one friend because of his eccentric and particular personality. He is a well-mannered and dutiful son to his parents and never harms others, but his piano melody always sounds sad. He is hidden in a veil showing his true feelings only to his best friend and manager, Phillip. He is a sad person keeping the secrets of the past that nobody knows although he has a charismatic personality and wonderful environment.

She is a diligent person who works at her adoptive mother's Gimbap(Rice roll) house in the daytime and sells homemade accessories and clothes at her street stand at night. Even though she could not finish her studies, she is a talented person who is good with her hands and is to be able to win the grand prize in an handicraft contest open to the public.She never looses her smile nor her dashing spirit although she lives in poverty. She has an opportunity to visit Austria from her prize winning in the handicraft contest and meets Phillip and Jae-Ha by fate. Eun-Yeong who does not know of this ironic fate deeply misses Su-Ho from her childhood.

She is a capable career woman who started her career from the bottom and became the director of the planning department in a leading classical record and concert planning company by her own ability even though the company is owned by her parents. I-na is a perfect woman with remarkable beauty, wonderful background, and outstanding ability, but there is only one thing that she earnestly desires for.It is Jae-Ha who played the piano with her during her childhood. She has exceptionally liked Jae-Ha ever since her childhood; thus, she gave up playing the piano and left for Canada to find Jae-Ha after he left Korea. She has a reckless personality to do so. However, she could not find Jae-Ha but completed her study in Art Business in Canada. She voluntarily tries to promote Jae-Ha’s debut in Korea after she happened to see an article of Jae-Ha activeness in Australia.

He is the only friend as well as the global manager of Yun Jae-Ha. He was born to Australian father and Korean mother and was expected to become a promising musician during his childhood. He plays the piano, the cello, the guitar, etc.Even though there are no musical instruments that he cannot play, he gave up playing music instruments. Instead, he decided to pursue his dream of a musican by becoming the manager of Jae-Ha who Phillip acknowledges as being a true musical genius. He is not only a considerate and warmhearted person who kindly understands Jae-Ha's fretful personality but also is a romantic person.