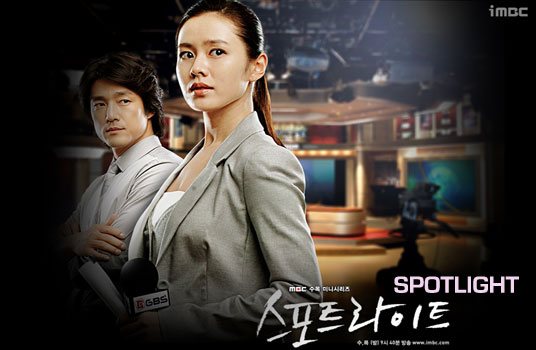 Oh Tae Suk is a charismatic reporter who is the lead reporter for the society news division. Tae Suk is someone who never gives up until the truth is told. However, because of his personality, there are always conflicts within his team. During his training of the new junior reporters he discovered the potential of Seo Woo Jin and not only become her mentor but also her love interest.

Hours and days of effort go into preparing a 1-minute TV news story. Behind the scenes, office politics and frantic activity takes place and this TV drama illustrates the daily lives of network reporters as authentically as possible. Woo-jin (actress Sohn Ye-jin) passed the highly competitive process of joining the news bureau of a major TV network to achieve her dream of becoming an anchorwoman. While undergoing the grueling first years as a cub reporter in the society newsdesk, she comes across a few bitter experiences. No matter how hard she works, her Cap, Oh Tae-seok(actor Ji Jin-Hee) somehow always finds fault with her abilities and it drives Woo-jin into a rage. But she finds the strength to rebound and channels her anger into fighting back and becoming a hard-hitting investigative journalist. At first, she wanted the prestige of becoming an anchorwoman but through Oh Tae-seok's hard training, she grows into a true journalist. She begins to develop a respect for Oh Tae-seok as a mentor and gradually falls in love with him....

Woo-jin is an aggressive journalist on the society newsdesk of GBS newsroom, who will do anything it takes to get a scoop. Woo-jin successfully interviews a fugitive but she rubs the police the wrong way because she interfered with their manhunt. The officers confiscate the tape that contains the interview. Through a series of events, she is able to recover the tape but since it has no audio track it cannot be aired on the 9 oclock news. Everyone blames Woo-jin for not taping the interview correctly and she finds her job in a tenuous position. Amidst her troubles, reporter Oh Tae-seok returns to the bureau as Woo-jin's boss. The appearance of Tae-seok creates tensions in the newsroom. On the first day of Tae-seok's appearance, he harshly reprimands Woo-jin and they get off to a bad start. Woo-jin grows into a better reporter after handling a variety of assignments and Tae-seok looks on with approval of her progress. He becomes enamored with the person he mentored. Tae-seok transforms Woo-jin into a better journalist and those changes also open up Tae-seok's heart. As Woo-jin and Tae-seok take on difficult assignments where they are threatened and pressured to back off, they develop a camaraderie that grows into feelings of love. Woo-jin gradually becomes a brilliant journalist who no longer needs any guidance from Tae-seok. Meanwhile, Woo-jin is in the running to become the new co-anchor of GBS Nightly Spotlight after she wins the prestigious Press Award for Excellence in Reporting.

She appears as the new co-anchor of the 9 o'clock news and Tae-seok looks at his erstwhile mentee with pride but also a touch of sadness. Why didn't he have the guts to tell Woo-jin that he wanted to be with her? Tae-seok heads to the airport on his foreign correspondent assignment while cursing his lack of courage. But at the airport he finds Woo-jin, who had sped to the airport after delivering her the news, waiting for him. Misty-eyed, they hug each other. Woo-jin and Tae-seok then take their relationship to the next level.

After undergoing the grueling first years as a cub reporter in the society newsdesk, she realizes that life isn't a piece of cake. But after finishing a year of covering criminal cases, she is reassigned to the culture newsdesk and finds herself getting closer to her dreams of appearing on the 6 o'clock news. Full of hopes for her career, she also finds more time to relax. But when Oh Tae-seok, a reporter who was banished from the newsroom after clashing with the higher-ups, returns from his exile in a small town TV station, her dream is shattered. Woo-jin is sent back to the society newsdesk and returns to her days as a beat reporter. She is then saddled with the duty of training cub reporter Lee Soon-chul, who is a conservative type. But she finds the strength to rebound and channels her anger into fighting back and becoming a hard-hitting investigative journalist.

Winning the journalism medal for three consecutive years, he is a true reporter who will hunt down a story like a pit bull. But his independent streak ends up putting him at odds with the higher-ups. His abilities as a journalist are highly regarded by everyone and the network cannot fire him for his disobedience because they would lose him to a rival network. So his bosses try to keep him on a tight leash while the younger news staff trembles in fear whenever he's in the newsroom. Three years ago, he wrote an article that became highly politicized and led to a big quarrel with his superiors, which ended with the network taking disciplinary action against him. He was subsequently relegated to a dead-end job at the network's local TV station. But when the society newsdesk starts to falter, his former bosses call him back to improve the quality of their operations and the second act of his career begins.

He grew up in the same town of his boss and competing with the chief of the politics newsdesk to become the next bureau chief. He used to advise journalist to only tell the truth no matter what but as he rises through the ranks of the newsroom, he makes compromises along the way to get where he wants.

He aspires to become the next bureau chief and then embark on a career in politics. Since he graduated from the same college as the bureau chief, he uses his connections to meddle in the society newsdesk affairs and bungle things up. As a journalist who covers politics, he analyzes all situations with a political perspective and tries to solve problems through political maneuvering.

As a single woman, she handles the internal affairs around the society newsdesk. She has a secret crush on Oh Tae-seok ever since they joined the company in the same year. But before she could develop the relationship any further, Oh Tae-seok was sent to a dead-end job at a local TV station. When Oh Tae-seok returns to the newsroom, she feels an affinity with him and her emotions begin to stir again. While she offers wise advice to the chief of the society newsdesk on important matters, she also tries to smooth out any rough patches between Oh Tae-seok and the chief that arise frequently. After she detects that Oh Tae-seok has special feelings for Woo-jin, she begins to treat Woo-jin harshly.

As a close partner of Woo-jin she worked with her on the same beat at the society newsdesk. She catches the attention of the chief of the politics newsdesk and is recruited to that bureau. She always maintains her composure in any situation and treats superiors with respect and has a charming personality. But she's not well liked by reporters who are younger than her. She knows how to use her feminine charms to get what she wants and it's the secret to her success. She later competes for the coveted anchorwoman position against Woo-jin.

He is assigned as Woo-jin's assistant reporter but he graduated from the same college and class of '06 as Woo-jin. He is a conservative guy and a bit thickheaded. After trying to reposition his relationship with Woo-jin as equals, Woo-jin comes down hard on him by wielding her seniority as a weapon. Every since that spat, he treats her respectfully. As he assimilates himself into Woo-jin's world of journalism, he finds himself liking what he does.

He tries to track down sensational news stories that will raise the TV ratings of the news program and win points from the president. He doesn't care if viewers will hate his news show as long as he trounces the competition and brings in more advertisers.

A crafty detective at the police station where Woo-jin is a beat reporter. He lost many opportunities to get promoted because every case he handled was swamped by journalists, who ended up muddling up his chances to crack the case. So he has bitter feelings against newsmen. He leads the legislation to remove the clubby pressroom from the police station, which is passed at the assembly. He tries to stop press leaks by harshly reminding his colleagues not to talk to the press until a case is solved. His actions put him at odds with journalists.

He has a close relationship with Woo-jin and even considers her as someone on his team. He provides her with important leaks. He has a crush on Woo-jin and this makes him the butt of many jokes at the precinct.