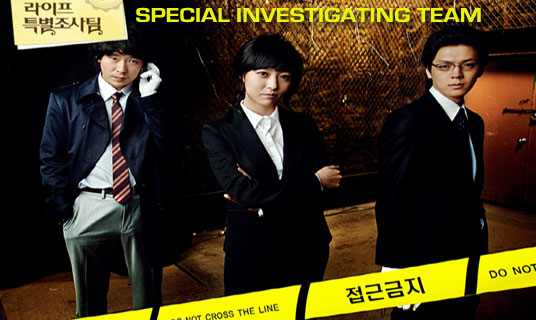 People worry about their future.

That is why people take out insurance policies.

Fear of death, disease, and freak accidents make people sign insurance policies and when they succumb to death or a disease, they and their families receive a payout from the insurance company.

Some people liken an insurance payout to winning the lottery. While others game the system and use insurance policies like their own personal ATM.

Everyone is dangling on a roller coaster in life.

Every day, people will feel small at times or muster up the courage to take a bolder stance. It's a constant mix off backbiting and sycophant behavior at work where hope and despair go hand in hand. Tragedy and happy endings are the luck of the draw.

That is the life that salaried workers live in.

The characters in this TV drama are ordinary employees who display extraordinary talents under extenuating circumstances.

They work around the borders of happiness and sadness as they unearth the truth amidst the lies.

So every day, they are thrust on a roller coaster of highs and lows.

This drama is about an insurance investigation team who investigates foul play and insurance cheats.

As someone who works for an insurance company, he must treat customers courteously but even though that’s the case, he doesn't hesitate to talk bluntly to customers who he thinks are trying to bilk the company. Constantly getting into trouble, he does irrational things that confuse the people around him. He will ramble around an accident side, looking for clues with a sharp eye. He'll try to haggle over the price of a cheap $50 suit to buy it a rockbottom price.

He carries chopsticks with him all the time so that he can eat a morsel of someone's meal. When he's exhausted, he'll take a subway ride on Line 2, which goes around the city nonstop, to take a nap with his legs stretched out. He never feels any stress. He'll go to a barbershop once or twice a year to get a haircut. Sometimes he won't take a shower for more than a week. But when he has to use the bathroom, he'll relieve himself as soon as possible. He'll burp and fart whenever he has to.

What are the similarities between Park Chan-ho and a con artist? They're both good liars. It's hard to read their minds. They are both hard to get a hold of! Frequently staying up all night at work and going on trips to investigate accidents now and then have made her one of the sharpest investigators on the team. She is proud that she never made a mistake on the job even under a lot of work-related stress. But don't take her word for it. Whenever she gets drunk, she'll turn into someone entirely different and the next day, she'll wake up with no recollections of how she behaved in her drunken stupor. Most of the times, she is a charismatic person who can overwhelm people with the sheer power of her personality but when she has a drink, she'll turn into a pussycat and act like a nubile, young girl. After kicking back a few shots of liquor, she'll dance on tables and sing like a rock star.

But after a night of drinking, she'll appear at work the next day as her usual self and this causes a state of confusion among her co-workers on how to define her character. During a night out with her co-workers, she'll tell Ms. Jung, the secretary, that she can call her Kang-lee instead of Ms. Joo but when Ms. Jung calls her that the next day, she'll get upset and berate her for it. She'll act like she never allowed Ms. Jung to call her that. She is one of the smartest employees in the investigative unit. When she decides to interrogate somebody, she'll track them down and grill them for all their worth.

After being jobless for 3 years, he barely got hired at an insurance company. He took English language courses in America during summer and spring breaks. His TOEIC score is nearly perfect. He graduated with a high GPA average. In every company that he applied to, he always got a call to come in for an interview.

However, during every interview, he is told that he gives canned answers and lacks any creativity! So he faced rejection many times. For three years, he was in the pits of despair and gloom. However, he finally got hired at one of the top five insurance companies in Korea and his confidence was restored. Since he found a job later in life than his peers, he is very eager to get ahead. If he doesn't get promoted within the next two years, then he'll never be able to attain his goal of becoming the youngest CEO of an insurance company. So he needs to quickly master his duties and perform well. But Chul-soo's goals are shattered on the first day on the job.

According to his view, his life became stuck in a tar pit on the very day when Park Chan-ho volunteered to look after his back. Now Chul-soo's goal is to get back on track! But it's not about getting a fast track promotion or becoming a CEO any more He just wants to withstand Park Chan-ho, his bizarre partner! That's all he wants in life! He is obsessed about cleanliness but some dirt or speck will alway escapes his probing eye.

He is the prototypical salary man who focuses on holding onto his job while doing as minimal work as possible. He was once on a short list of employees who were to be axed because he was deemed to be incompetent. But he increased his lobbying efforts to key superiors and became entrusted with the special investigations unit, surviving the last round of layoffs. So Park Chan-ho is a ticking bomb. He takes an aspirin every day to alleviate the headaches he gets from all the trouble that Chan-ho causes.

Whenever there is a company reorganization or management shuffle, he tries as hard as possible to get Chan-ho sent away to a different division but it always backfires. Nowadays, Kang-lee has become a double threat because she never knows when to drop a case that the higher-ups already cleared. Because of her actions, he begins to suffer more stress and gets constipated. He also has to concentrate more on extinguishing any problems that erupt at work that might jeopardize his cushy job. (He also seems to have hemorrhoids. But he is doing everything he can to cure it.) But when the dust settles, he defends the actions of his team, showing them that he has a big heart. He watches CSI and reads crime thrillers to retain his touch as a detective and he sometimes perturbs his team by trying to pigeonhole accidents into similar cases he saw on a CSI episode.

Having a law degree, he follows the rulebook and never errs. But at night, he turns into a wild party animal at expensive gentlemen clubs. He will agree with both sides of an argument and always stand in the middle ground, which makes him look like a sly operator, but his behavior is actually the product of extreme self-preservation where he doesn't want to make enemies with anyone.

He'll wait for someone else to make a mistake first. Since he'll never take a certain stance on any matter, he'll be the mediator for arguments thereby removing himself from any position that might carry repercussions. He carries a copy of Reader's Digest all the time and likes talking a lot but most of the time, he loafs around at work. He’ll try to offload his work to other people. While Bae Dong-shik is like a fox, Yeo Han-soo is a raccoon.

When Mr. Bae slanders prosecutors and judges for their incompetence, Mr. Yeo will counter such insults by airing his low opinion of detectives and cops. When Kang-lee and Chan-ho quarrel at an accident site, Mr. Bae and Mr. Yeo will verbally slug each other in the office.

He has a peculiar character. She graduated from a commercial girls' high school but she didn't study hard and wandered from one job to another. She met many mean and strange people during her job-hopping days and she talks like a madam of a bordello.

She is also a blunt, straightforward person and has little regard for the feelings of others. Her hair and clothes are straight out from Japan's Harajuku street style and she'll come out with a new look every day. Her choice of clothes confounds the people at work but she hardly notices the effect that her clothes have on others.