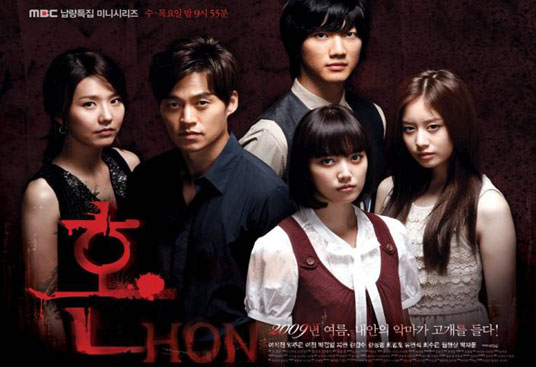 A high school girl, named Hana, discovers her special ability after her sister's wrongful death. She sees ghosts, hears their stories, and even becomes possessed by them to exert extraordinary strength... Ryu Jin, a criminal psychologist who abhors vice, gets to know Hana and treats her with kindness. As he gains Hana's trust, she begins to fall in love...

When Ryu Jin finds out about Hana's special ability, he begins using her to punish criminals. Then, he plans a scheme to crush Baek Do-sik, a lawyer who defended the murderer of Ryu's mother and sister.

A bright and righteous high school girl with exceptional Taekwondo skills. She always protects her beloved twin sister, who has a slight limp. When her sister dies, Hana gains a special ability; she can see and become possessed by ghosts. Once she becomes possessed, she exerts monstrous strength... Due to Ryu Jin's warmhearted care for Hana, she falls in love with him. However, he begins to use her possessed being to punish criminals. She begins to doubt whether she is doing the right thing.

Hana's younger twin sister who has a slight limp. Shy and introvert, Doona always depends on her older sister with trust. After Doona becomes killed in a fire, her ghost possesses Hana, releasing her wrath.

An incredibly gifted criminal profiler. With exceptional intuition and irresistible charisma, he immediately penetrates the minds of criminals. He lost his mother and sister in a horrifying incident at a young age, but the criminal was acquitted due to Baek Do-sik's legal defence. Since then, Ryu has been determined to revenge on vice. When he finds out about Hana's special ability, he begins to use her power to murder criminals. Soon enough, he sees an opportunity to revenge on Baek Do-sik.

A high school student who is often bullied by his friends. He develops a crush on Hana, the only person who stands on his side and treats him nicely. He tries to stop Ryu from using Hana to kill people... Eventually, this youthful 18-year-old boy risks his life to protect Hana.