Sorry i love you 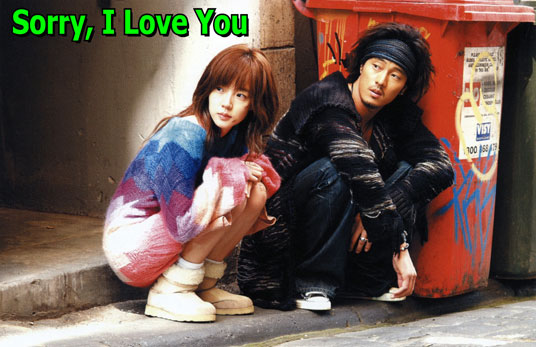 "A Story about Extreme, Death-Defying Love"

- This is a really sad love story."Sorry, I Love You" is a story about Cha Mu-hyeok (So Ji-seop), who faces death everyday with two bullets stuck in the head, and Song Eun-chae (Lim Su-jeong), whose chance encounter with him develops into an extreme love affair.

- "Sorry, I Love You" begins with a man's fight for revengeCha Mu-hyeok is a show business manager who plans to take his revenge on his birth mother for having abandoned him. After being abandoned by his mother, he was adopted by an Australian family at the age of two. He, however, left his foster home when he was 10 because of his adopted parents' ill treatment. He is a man making a living as a henchman of a street gang, a pimp, or a drug pusher.

- "Sorry, I Love You" is a story about an extreme love affair of two men and a womanThough he has been hit with bullets in the head, Cha Mu-hyeok insists on going to Korea to see his birth mother determined to die in his birth country. Contrary to his belief that she abandoned him for poverty, his birth mother turns out to be a top movie star and his twin brother also a top star. In a plot to revenge himself on his mother, Mu-hyeok volunteers to work for his twin brother, Choi Yun (Chung Kyeong-ho), as his manager in a bid to run him. In the process, Mu-hyeok falls in deep love with Yun's program coordinator, Song Eun-chae.

Cha Mu-hyeokMu-hyeok is a man like a wild dog. He has a rough manner and is full of vigor, but deep down he is quite nice in his love that nobody could imagine.

Song Eun-chaeEun-chae is a tender-hearted woman unbound to custom. She is destined to be in pathetic love between Cha Mu-hyeok and Choi Yun.