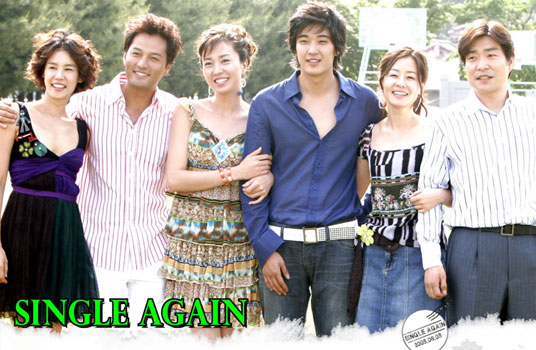 Everything is difficult at first and gets easier the second and third time. However there is an exception in the case of marriages. The first marriage is difficult but the second and third, it gets worse and even harder. This drama depicts the inner thoughts of men and women who once married but are now single again. It shows how they go about falling in love again in a comical and sometimes absurd way to evoke tears, hope and laughter out of viewers. With fantasies of love, this show washes away all stress accumulated from everyday life within viewers.

Single again by forced circumstances, will their love life be eventually given a new lease of hope and happiness?

Just when you think that things will not go worse, both were later retrenched due to an organizational re-structure led by the new CEO (Kim Sung-Min alias Sung Taek) of Hana Travel Corporation. Ji-ho and Sung-Min had a misunderstanding that seeded the start of their intertwined fate. Then enters the character of beautiful Jo Mi-ryeong, a good platonic friend and admirer of Sung-Min. To spice things up, she's also an old classmate of Ji-ho and Sun-kyoung. This completes the essential Korean love triangle but it is definitely not as weepy and heavily sorrowful as most drama series.

Will Mi-ryeong be successful in breaking them up? And what’s the relationship between the little girl and Sung-Min?

This drama's refreshing storyline brings our attention to this group of men and women who were once married but are now single again. It highlights their inner sentiments and struggles to decide if to take another dare at love realms. Also, they have to cope with the pressure from the society while continue with their lives.

Love is a necessary but not sufficient condition for a forever-happy marriage due to factors beyond human control and predictability.

Audience will have a great time laughing out at the absurdly comical but hilarious incidents. A tinge of sweetness also comes at seeing how the characters are gradually going to fall in love again. In the show, Sun-kyoung, tries all kind of amazing ways to seduce Sung-Min's school senior (a restaurant owner) but is given the cold shoulder. It is done in such a light-hearted, funny way that you will enjoy laughing than dismayed by her. There will be an interesting development between them.

Kim Ji-Ho, a veteran actress, portrays her role as a mother with ease and has a wide smile that comes with lively, expressive eyes. On the other hand, Kim Sung-Min charms the viewers with his tanned and mature outlook. His drama has won over Philippines audience and was the 'Honorary Philippine Tourism Envoy' in Korea. The beautiful white-sand beaches in the show were filmed in Cebu.

A short and funnily- sweet drama in general. Now you will realize that a good Korean drama can also be watched affectionately without shedding much tears, yet can still touch you with its dominant love and family values.