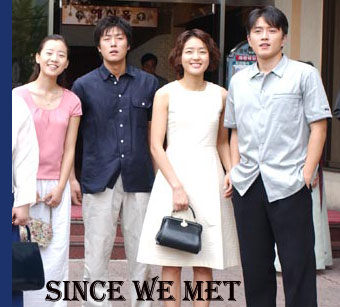 Also known as: Since I Met You / Since I Knew You

Choi Jin Shil stars as Lee Ok Hwa, a good-spirited "yun-byun" (Korean person living in China) girl from China. Ryu Shi Won is an entertainments reporter that happens to find himself in trouble when he's in China. He is played around with by kkang ppaes, but Lee Ok Hwa saves him when she finds out one of the kkang ppaes is her own brother. When Ok Hwa comes to Korea to work under Ryu Shi Won's uncle, Ryu Shi Won tries to pretend like he never knew Ok Hwa, which doesn't work out. They always get in fusses and fights, but those are what bring them closer together. On the other hand, Ok Hwa lives with her boss's sister and her two children. The twins, Su Jin and Mi Jin (Park Jin Hee) are bright kids that grew up very well despite the difficult financial problems. Mi Jin is still in college, and secretly loves Lee Suh Jin. She coincidentally works for Lee Suh Jin's outrageous grandmother, and while working there becomes closer to Lee Suh Jin. The only problem is that Mi Jin's cousin (also Ryu Shi Won's sister), Hae Won (Park Yae Jin) likes Lee Suh Jin too. The struggles and love that bonds a family together is beautifully portrayed in this drama.