Shoot for the Star 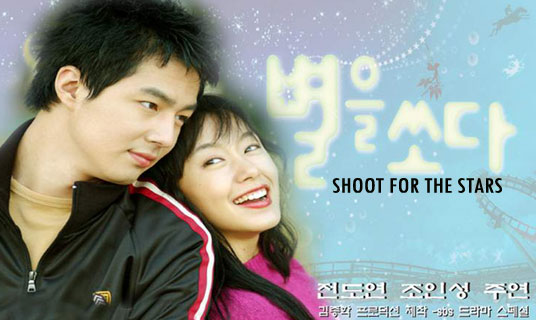 A drama produced by the producer and writer of “Beautiful Days”, one of the hit of SBS.

Seong-tae (played by Cho In-sung) is an orphan who wants to be a movie star. The only happy days he remembers in his life was the one year when he was adopted by a friendly family and grew up with their son. The next year he had to be sent back to an orphanage because his foster father went bankrupt. He made up his mind to become a movie star and find his foster parents and brother who made him feel like he was a part of a family. It is a long, hard road to become an actor. Adding to these problems, he has a hard time reading scripts because he has dyslexia.

Although frustrated at times, he has a warm-hearted manager Han So-ra (played by Cheon Do-yeon). She helps him become a great star. Her ceaseless efforts pave the way for his success as a promising actor...