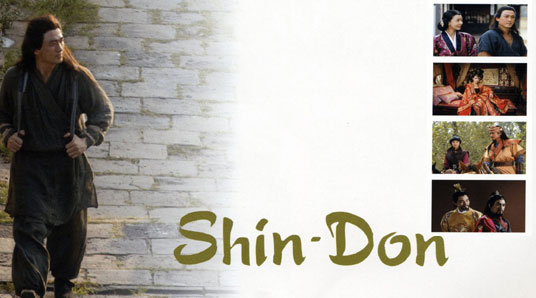 For MBC Wallpaper from this drama : http://www.imbc.com/broad/tv/drama/sindon/wallpaper/index.html

For MBC Photo Gallery from this drama : http://www.imbc.com/broad/tv/drama/sindon/photo/index.html

King Gongmin of Goryeo was taken by the Yuan Dynasty as a political hostage and was forced to stay there for 10 years before coming to the throne. After he became the King of Goryeo, he decided to make his country more independent. Shin Don was a Buddhist priest who enjoyed King Gongmin’s confidence. He was born as the son of a princess and a slave. Shin Don became so powerful that later he gained absolute control over the country. Though he was a Buddhist priest, he relied on political power more than compassion or loving kindness in order to survive the troubled times. He was an innovative philosopher who both despised and worshipped all the established ideas. While some people considered him a man blinded by greed for power, others believed that he was a true social reformer who struggled to revive Goryeo during a period of turmoil. This drama will introduce viewers to Shin Don's ambitious life full of ups and downs, as well as the love and betrayal of King Gongmin and Princess Noguk.Shin Don is one of the most disputed historical figures. He could be a mere vicious Buddhist priest or he could be a hero. Since there are many different stories about him and the truth remains unknown, his life seems almost mythical. The drama portrays him as a schemer obsessed with power, willing to resort to trickery. On the other hand, it also shows him as a revolutionist who tries to create a democratic power structure. Religion was his ideal; however, it was also his tool of seizing political power and winning popular support.

He was born as the son of a slave in a Buddhist temple. His Buddhist name was Pyeon Jo, but he renamed himself after gaining political power. He was a very smart child; however, he was violent and had a twisted mind. To learn more about the world, he was sent to China. During his training, he realized that the people's suffering should be remedied by the right politics, not by religious spirit. He met King Gongmin in China and helped him carry out a reform. However, in the process he was too deeply involved in a power struggle. Later he was accused of a plot of treason by his jealous competitors. He had overcome many obstacles helping King Gongmin and Princess Noguk create an ideal world. However, one day he realizes that he has become an obstacle himself.

After King Chungjeong was dethroned by the Yuan Dynasty, King Gongmin came to the throne. While he stayed in Yuan, he married Princess Noguk of Yuan. Later, with the help of Noguk and Shin Don, he gained independence from the Yuan and carried out a drastic reform. However, after Princess Noguk died during labor, he became extremely depressed and dedicated himself to Buddhism, letting Shin Don administer the affairs of state. Later he felt threatened to realize that Shin Don had become more powerful and influential than the King himself. Ultimately, he was alienated from Shin Don by the priest's political opponents.

She really loved King Gongmin and Goryeo. She was a princess of Yuan. She was a woman of cheerful spirit. She could have been the Yuan's Crown Princess, but she was married to King Gongmin through a political arrangement. After King Gongmin came to the throne, she helped her husband to become a wise and respectable King. She became pregnant after 16 years of marriage, but she died during labor.

She was a court lady offered to Yuan. Later Togon Temur fell in love with her and she became the second queen. She expelled all her enemies and gained absolute power. Later she even exercised her influence over Goryeo.