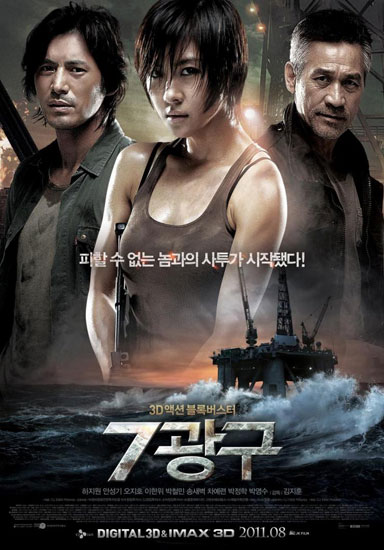 Three-dimensional films have become a dime a dozen in Hollywood, but they are still untapped territory in Korea, which makes the release of "Sector 7" significant in Korean film history. And "Sector 7" is hoping to pave the way for 3D film market in Korea.

The film depicts the crew of an oil drillship that battles a sea monster that has been transformed by a virus.

"Sector 7" is unique in that it features a female warrior as the lead, which is hard to find in most Korean films. Actress Ha Ji-won, who played a stunt woman in the drama series "Secret Garden" earlier this year, goes further than that in "Sector 7".

To better express her character, Hae-jun, who spends most of her time at sea, Ha learned to scuba dive and got a motorcycle license.

She also did most action scenes without a stunt double.

A majority of the scenes were shot in a studio in Paju, Gyeonggi, and they were later completed with heavy computer graphics. It took five years including pre-production to complete "Sector 7".

The actors, who had no previous experience with 3D films, had trouble finishing each scene. The film also stars established actors Ahn Seong-gi and Oh Ji-ho as members of the drillship crew.