The Secret of Coocoo Island 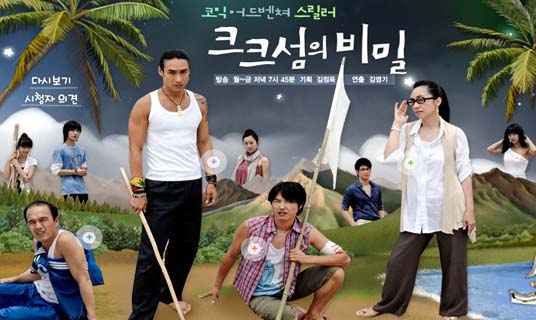 
Just like the stars scattered across the sky, along the clear blue waters of the Western Sea, there exists countless small deserted islands. "The Secret of Coocoo Island" is about employees of a small shopping company who are stranded on one of these deserted islands for 180 days, and their exciting and emotional struggle to survive!

Over the weekend, ten employees of a shopping company sail on a boat to deliver goods to islanders for charity. Tragedy strikes when the boat gets into an accident, and when the employees awake, they find themselves stranded on a deserted island. Since all of them were drunk prior to the accident, nobody can clearly recall how the incident occurred or how they managed to end up on the barren island. To make matters worse, Assistant Manager Lee and Manager Yum are nowhere to be found.

- Female in her early 40s, Director of the Purchasing Department As a spinster, all she cares about is her work. She is stubborn and rigid, and never tolerates any mistakes. Although she is the Director, her actual influence in the company almost matches that of the CEO. Rumor has it that she will soon be promoted to the Chief Director position. She presents herself as a flawless businesswoman with her sleek horn-rimmed glasses and sharply ironed clothes. To male managers and directors, she is considered a threat. To female employees, she is the object of envy. She faces the biggest challenge of her life after being thrown on the deserted island. With her powerful personality, she positions herself as the leader and "queen bee" of the group.

- Male in his late 30s, Manager of the Purchasing Department He gained his title of Manager through his connection of being the cousin of the CEO's brother's friend. Although he entered the company through connections, the CEO is too busy to protect him, and Manager Kim who joined the company before him finds great joy in giving him a hard time. Therefore, all things considered, his position in the company is far from stable. Since he has never worked in an office before, he is unfamiliar with the concept of teamwork, and he is not sharp with the work itself. Life as a salary man is especially difficult because Manager Kim nitpicks everything he does. However, his ability to adjust to his surroundings on the deserted island takes everybody by surprise. Most of all, he even surprises himself in the discoveries of his competence and skills in this fight against nature.

- Male in his early 30s As a son from a wealthy family that owns several luxurious buildings in the upscale Gamgnam area, he wears nothing but designer brands and drives his fancy imported car to work everyday. Hes a straight shooter who always draws a clear line between black and white. His pure and innocent heart, however, is his biggest charm. Just a day prior to leaving for the island to do charity work, he passes out his wedding invitation to his coworkers. But who would have ever guessed that he would be stuck here on a deserted island just ten days before his wedding?

- Female in her mid 20s, joined the company the same time as Shim Hyung-tak She's a chic, city girl who can be snobby at times. She definitely knows the game of love, and she's a firm believer that a girl has to play hard-to-get to be more desirable to guys. She was born and raised in Seoul. The only country life she's ever experienced was from her travels to fancy inns or luxurious condominiums. As this city girl lands on the island, the inconvenience and isolation begins to drive her crazy.