Say you love me 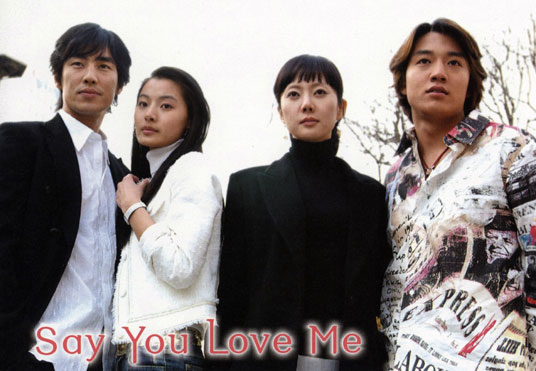 Who is that by your side? Is she the one you truly love? Is he?

' I can't fly without Young-Chae...because it's impossible to fly with only one wing.'' Byung-Soo is mine. He has always been mine ever since we were born.'' There are neither victims nor assaulters when it comes to love.'' If I knock that little girl down as you wish...then would you come to me?'

There's Byung-Soo and Young-Chae who have grown up together ever since they were little. They seem to share everything, not to mention their dream so in order to together make their dream come true, they enter the same film company.'And there's Ina who is the successful owner and the president of the film production company. She also has Hee-Soo beside her but they are not desperately in love with each other and lead their own private lives. They just occasionally go out and sleep together. But all of a sudden there comes this young and lovable couple and somehow she's not that pleased to see them. Why? This young couple seems to be such full of life and they're in love! She has missed all that just in order to come up where she's now. She is totally feeling at loss now and she just can't stand this feeling. She asks Hee-Soo, 'Take Young-Chae away from Byung-Soo.'

After losing his parents by an accident, he is taken in and brought up by a monk at a Buddhist temple. This is also how he came to meet Young-Chae who was then the eldest daughter of one frequent visitor Buddhis, Mr.Seo. When he arrives at puberty, he goes to live with Young-Chae's family. And there he and Young-Chae grow up like brother and sister. For Byung-Soo, Young-Chae's dream is his dream. So in order to help her become a film director, he himself decides to become a film producer and together enters Ina's film production company. Just like a hull covering a bean, Byung-Soo has always existed for the sake of Young-Chae and likewise will willingly die for Young-Chae. These two have been stuck together for such a long time that each other's existence now seems perfectly overlapped. They are inseparable from each other. And Ina starts watches them...

From an affluent family background, she is an accomplished woman who boasts a MBA degree from a prestigious school in the States. She's now the owner of a film production company that produces three to four films a year. There's no such word as "fear" or "hardship" in her dictionary and her obstinate character always lands her with whatever she wants. Combing numbers of brilliant strategy and tactics, she has made a great coup at such an early age. However behind this great success also lies great sacrifice she's made throughout her twenties. In other words, she has skipped the flower blossoming period and dived right into bearing fruits period.

Graduated from film academy, she enters Ina's film production company together with Byung-Soo. She's the eldest daughter of Mr.Seo who was once a marine and perhaps this explains why she's such an energetic tomboy. She is really a girl of enormous energy and endorphin but she never falls or gets hurt. This is all because there's Byung-Soo who is always around her to protect her. Always with Byung-Soo by her side, she now dreads the word "separation". This mentality of hers had developed from her long time relationship with Byung-Soo. He was there whenever she needed him and so it seems just too natural that he should be right beside her forever. This kind of unripe relationship is surely love, yet the feelings have developed from brother and sister kind of relationship. These two can't stand separation from each other.

He composes music for Ina's film production company. His father had wanted him to be a politician and following his father's will, he had gone to the States and that's where he first met Ina. When he returns from the States, he hides himself away from his father and he starts working as a music composer at Ina's company. He's occasionally goes off on vagabond trips to inland places whenever he makes some money from his music work. Recently something funny and strange has been growing inside him whenever he looks at Ina, something that he hasn't felt before. Is it jealousy? How can I feel jealous? I'm looking at this person but she wouldn't look at me. Then this feeling is love, isn't it??

Say you love me