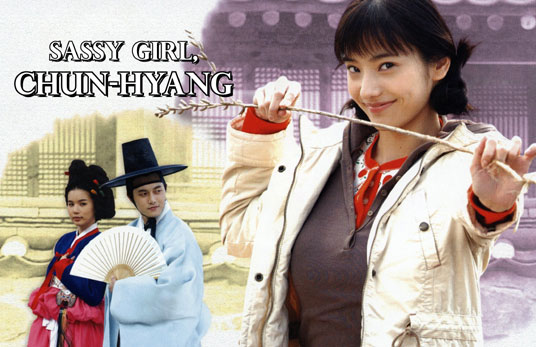 'Sassy Girl, Chun-hyang' is the 2005 interpretation of the 'Legend of Chun-hyang.' The story begins when Lee Mong-ryong is transferred from Seoul to a high school in Namwon, North Jeolla Province. Chun-hyang does her best to help Mong-ryong, her first love and the son of the Namwon Police Station chief, to enter a prestigious university. However, after meeting with Mong-ryong's first love, Chae-rin, Mong-ryong's love toward Chun-hyang is shattered, although Chun-hyang's love remains unwavering.

One day, Byeon Hak-do, CEO of a famous entertainment company, appears in her life. He exudes confidence that he can make any woman fall for him. But as Chun-hyang shows no interest in him, his self-esteem is damaged profoundly. Byeon Hak-do is determined to make her love him.

The production team of this drama says they wanted to present a whole new image of Chun-hyang in line with modern times as she is an attractive female character who showed courage in choosing her love in the Joseon period, when Confucianism was a dominant value.

This fusion-style drama makes various new attempts in terms of genre, such as mixing rap with Pansori (Korean opera) for background music.

(Seong Chun-hyang)Because of poverty, Chun-hyang has to hold several part-time jobs to make her living. She delivers newspapers, cleans ponds and works as a photographer. Nonetheless, she studies hard at school and achieves good academic performance. She is regarded as the beauty queen of her school.

(Lee Mong-ryong)Lee Mong-ryong is a tough but very simple-minded and hot-tempered guy. Although he is the son of the police station chief, he always gets into trouble in school. With the help of Chun-hyang, he enrolls into a prestigious university, achieving both love and career success at the same time. However, his love toward Chun-hyang is put to test when he meets his first love, Chae-rin.

(Byeon Hak-do)In the classic 'Legend of Chun-hyang,' Byeon Hak-do is a corrupt public official. But in this drama, he is the CEO of an entertainment company, who helps Chun-hyang whenever she gets into trouble, reminding of the 'Daddy Long Legs' character.

(Hong Chae-rin)Chae-rin was Mong-ryong's high-school senior. She is the first love of Mong-ryong's and a rival of Chun-hyang's. As an opportunistic character, she knows that Mong-ryong likes her, but keeps ignoring him until Mong-ryong passes the difficult state bar exam. She is a sinister character, who interferes with the relationship between Mong-ryong and Chun-hyang, eventually making them break up with each other