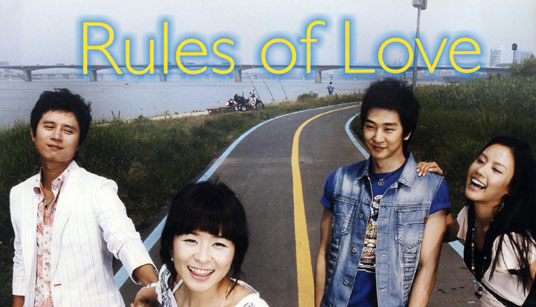 A New Style Love Story. There are many unsaid rules and wise sayings about love as well as about breakup. It's true that most breakup scenes in dramas are a bit trite and cliché-ridden. For instance, it always rains when the story’s main characters break up. Oddly enough, even the one who gets dumped usually wishes for his or her ex-lover's happiness even though he or she is completely heartbroken. How come every hero in the melodrama is as nice and sweet as an angel? What about something like this for a change - 'I'm not going to let him get away with this.' 'I'll chase her to the end of the world.' Or 'I'll make him pay for my broken heart and pain.' Even though a couple breaks up, there are still things left to be taken care of. They need some time to heal so they can later carry on.

A Contract Breakup. Many romantic dramas have used 'the contract marriage' (where the people aren't really married, but pose as if they were) as its subject. However, this drama will introduce viewers to love and contract from the point of view of a couple that breaks up. She isn't ready for letting him go when he wants to break up with her. He, on the other hand, has met all the requirements and is ready to put an end to this relationship.

The Dreams and Happiness of the Young GenerationThe 40,000 young people are reported to be unemployed. Most of young people are looking for a job. They don't have time to talk about their dreams or hope. This is the story of the young people who search for their dream, strive to achieve their goals and learn something about love and happiness.

She's the oldest daughter of a teacher who is in charge of student's behavior. She's sweet and real. However, once she sets her mind on something, she's very stubborn. She's determined and she knows what she wants in life. She sometimes has troubles with her brother, but she's never done anything that might hurt other people. She's also proud of that. She's full of love and dreams, but something terrible happens to her! The moment when she first meets a guy named Jae-min, everything starts going wrong. He had such an innocent smile. He told her that he loved her. She believed that she could be happy even in a hell as long as she was with him. She believed in love. She believed in him. She was dreaming of a beautiful wedding. However, he wants to break up with her. She can't believe what is happening to her. She goes to meet the guy. However, he looks fine ? not guilty at all from the breakup. He lives his life as if nothing ever happened. He tells her that he never loved her. She asks herself; what should I do with him?

He seems sweet as a child. It seems that nothing much is going on in his head.He lost his parents when he was still a child, so his grandfather raised him. He seems happy and carefree, but he's very soft-hearted and lonely. He likes women. He's surrounded by the women that he claims to be just friends. He's rather whimsical. Once he likes something and focuses on it, he can't see anything around him. This personality makes him attractive, but it can also be very hurtful to some people. If he didn't have his unique sweetness or his charming smile or his handsome appearance, he would have been a target to many people who hate him. He's a rude and rather stupid player, but there's something about him so that most people can't hate easily. He's interested in Hee-Won who frequents Seo-Jun's studio. He tries to get a job there to get a chance to meet her. However, things don't go as he plans. Then, he decides to use Geum-Young. He thought that his plan had worked beautifully, but he didn't expect Geum-Young to make a counterattack. Even though he's a Casanova who can attract any woman with his charms, it doesn't seem that he can get away with Geun-Young. After he announces his breakup with Geun-Young, he ends up paying for it in a big way.

He's a successful photographer. He runs a photo studio. Since he's very good at what he's doing, many famous actors want to get their pictures done by him and many companies want to use his talents in their commercials. Since he's never been in need, he doesn't care about money. He travels around and when he gets tired of that he comes back to work. When he gets bored, he goes somewhere leaving everything behind. He's a man of few words. He's not good at expressing his feelings. He's good-looking, but he's not the sweetest person in the world. He once loved a woman, but now he's not interested in having a relationship. He's very professional. When it comes to his work, he's a perfectionist. He doesn't get along with Jae-Min who is a troublemaker. However, he can't fire him because he knows that Jae-Min is passionate about photography. Jae-min has respect for him. When a new assistant Geum-Young starts working in the studio, he has more to worry about. He's attracted to Geun-Young, but he's at a loss when he finds out about her relationship with Jae-Min.

She's working for a magazine as a reporter. She's the reason that Jae-Min got a job at Seo-Jun's studio in the first place. She was born into a wealthy family. She seems so fragile and quiet, but she's very smart and proud. Once she finds something she wants, she never lets anyone else have it. Since Jae-Min starts working in the studio, she's been bothered by his interest. In fact, the person she had in mind was Seo-Jun. However, she was too proud to make a move. She gets jealous when Seo-Jun shows interest in Geun-Young. To make things worse, she learns about the relationship between Jae-Min and Geun-Young.