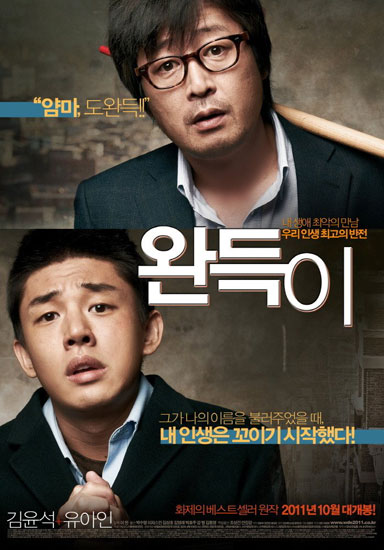 Based on a novel, this is a movie about a poor and rebellious Wandeugi, meeting an oddball teacher and growing up.

"Punch" is an acclaimed coming-of-age film based on the enormously popular novel by Kim Yeo-ryung and play produced by Kim Dong-soo. It's a timely text presenting the possibilities of the One Source Multi Use (OSMU) products. 18 year old Wanduk and his family's tale is portrayed with a jaunty, dramatic rhythm. Wandeuk's father is afflicted with kyphosis- commonly known as being hunchback. His live-in uncle isn't completely normal either. What's more, his mother, who makes an appearance in his life out of the blue, is Filipino. All of them, however, are precious to Wandeuk. And so is his homeroom teacher, Dong-joo, who is every bit the troublemaker Wandeuk is. They are constantly bickering and fighting as though they are enemies, but become more inseparable than family. "Punch" begins firmly rooted in the coming-of-age genre, but turns into a family drama and a social drama dealing with such crucial issues as the generation gap, education, disability, and multi-culturalism. It does all this and imparts some valuable lessons while providing entertainment and inspiration.