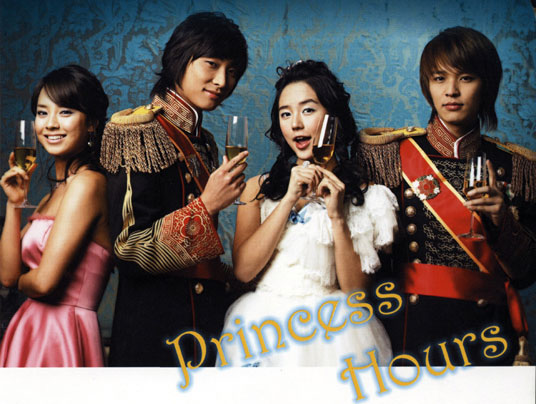 For MBC Wallpaper from this drama : http://imbc.com/broad/tv/drama/gung/wallpaper/

For MBC Photo Gallery from this drama : http://imbc.com/broad/tv/drama/gung/photo/

Princess Hours is a drama that starts with the interesting premise. What if modern Korea were a constitutional monarchy with a king? and offers two types of fun the romance arising between a noble prince and an ordinary girl, and the familiarity of all this happening in modern-day Korea. A perfect boy from a noble bloodline, with good looks and a sense of unpolished beauty has to marry against his will at the age of 17. An ordinary girl from an ordinary family, with a clumsy character, average grades and average looks oversteps the prejudice and barriers surrounding her. The process how they fall in love with each other unfolds with excitement.

Shin Chae-kyeong and Lee Shin, because they dont know each other well, go through numerous incidents in which they end up fighting. Chae-kyeong witnesses the scene where Lee Shin proposes to another woman to avoid their arranged marriage and this is how the two become fully aware of each other's feelings. The story evolves from the fact that Chae – kyoung's grandfather was very close to the former monarch, whose wish was for her and Shin to get married. This gives some impetus to the otherwise unrealistic union of the two. As the drama progresses, many other fine men, including Lee Yool, a cousin of the royal family, make their appearance. The story of the two characters, who keep quarreling about structural problems such as the rules of the royal household in the midst of the difficulties of being a prince and of the arranged marriage, will unfold in an interesting way. The show s fun lies in the episodes concerning the status gap that exists between a prince and an ordinary citizen. As more problems of status arise, the uniqueness of being a prince will be more greatly exposed, and doubling the fun of Princess Hours.When the kings illness gets worse, Crown Prince Shin receives an order to get married his arranged marriage partner. Shin realizes that there have never been personal choices available in the life of a Crown Prince, though he's only nineteen. Prince Shin proposes to his girlfriend Min Hyo-rin. Taking it as a joke, Hyo-rin shows her cute smile and takes off to practice for an international ballet competition. Shin doesnt hold onto her but just smiles faintly as she turns away and leaves.Chae-kyeong has a dad who stays at home as a full time house-husband after his business failed and a mom who works as an insurance consultant.Chae-kyeong's family, which was able to create happiness in the midst of difficult times, suddenly becomes in-laws with the royal household. To Chae-kyeongs parents everything seems much more like a dream, as they see that the arranged marriage grandfather always boasted of become realized. Chae-kyeong cries out loud, not willing to accept the fact that she has to get married at the age of nineteen, but Shin accepts the marriage, not caring about who becomes the queen.To him, shes not a person he ll ever love anyways and she ll just live in the palace like a doll. Meanwhile, Hyo-rin engages herself only in her ballet practice abroad without knowing about her boyfriend s marriage. Yool, second – in – line to the crown and the son of Crown Prince Hyo – yeol, who abandoned his position 15 years ago and left with his wife for England, comes back to his motherland. Upon hearing this news, the king instinctively senses the danger of Crown Prince Shin losing the crown and orders Shin to be careful of Yool. Shin just laughs at the fight over the crown and ignores the king s words. Chae-kyeong enters the Oon-hyeon palace, the palace of the new queen - bride, to get educated as the future queen. Shin, who visits the detached palace, is stunned by the beautiful presence of Chae-kyeong in her ceremonial dress.

An art major at an art high school who, one day, suddenly becomes the queen.She is an active girl who goes around wearing her training pants inside her school uniform skirt and enjoys sketching scenes with a comic-like imagination. Although she is easily befriended by anyone regardless of age and doesn't make enemies, once she starts disliking something she continues to do so. After she becomes queen she is disappointed that Kwon Tae-byeong is in fact the Crown Prince Shin; a young heartthrob who fights with her endlessly over everyday issues. However, her affectionate feelings toward Shin grow, once she starts living inside the palace and learns of the boredom and loneliness he experiences. At the same time, she is confused by the feelings she has toward Yool, whom she meets after she has already decided to get married to Shin.Chae-kyeong quickly and profoundly observes the hidden desires and secrets of power found inside of the elegant palace better than anyone else. She becomes a central character that changes not only the palace itself but also all the other characters in the palace.

The one and only Crown Prince of the Republic of Korea; the young man who will inherit the throne.He possesses the intelligence and appearance of the son of a bright king and a beautiful queen. Although he is irritated by the strict rules and dull life inside the palace and feels bored with his life, he has an intense and ongoing struggle with his own identity. Repelled by the fact that he has to spend his entire life as king inside the palace, he dreams of escape. When he starts learning what it means to be alive by looking at Queen Chae-kyeong, whom he marries without feelings of love, he gradually gains strength in life and starts to feel love towards her. Meanwhile, he plays love games with Hyo-rin, his ex-lover, and confronts Yool, his rival, at every turn.Shin is a 'nowhere man' who believes that there is no place for him; neither inside the palace nor anywhere else in the world.

Sir Eui-sung; second-in-line in succession to the throne.Having spent most of his life abroad, he feels less aversion towards the palace than Shin, and due to his innate optimistic character, intelligence, and down-to-earth attitude, everyone loves him. While Shin is straightforward in his behavior, Yool thoughtfully and philosophically considers his actions. He feels deep affection and sympathy toward his mother, who had a difficult time in raising him alone, and therefore understands his mother's avarice toward power; he himself slowly begins to express interest in the throne.Yool develops an interest in Chae-kyeong when he first meets her as he transfers to a private school. He grows to love her so much that he considers the crown for the first time when he learns that the marriage promise of the king concerns the 'grandson who will be crowned' among the two grandsons of the king.Although he keeps his distance from Hyo-rin, who approaches him knowing that he's ranked second in succession to the throne, he gets to understand her pure desire and experiences another change in feelings in his relationship with her. Like a plant absorbing water, he gets involved in the situation of regal authority and in Hyo-rin, naturally falling in love with her and becoming the rival for the one-and-only successor to the crown.

She is a perfectionist who has everything, including good looks, money, and brains.Love-calls from the royal household asking her to be the daughter-in-law are endlessly pouring in. Her interest in becoming the empress of the Republic of Korea and making Shin her own, grows. However, too suddenly she awakens from her dream of becoming the queen when Shin, her lover, has an arranged marriage with Chae-kyeong. She is hostile toward Chae-kyeong; the young woman who is her worst enemy, having stolen her dreams, and constantly attempts to recover her self-esteem and win over Shin's love. Also, when she approaches Yool, ranked second in succession, and sees the potential of realizing her ambitions, she is perplexed by the unexpected change in emotions she experiences.A character that provides an important change in the triangular and quadrilateral relationship composed of Chae-kyeong, Shin and Yool. She's an intelligent woman who knows to sacrifice something small for a realistic gain.Her efforts at obtaining her dreams and goals are purer and more passionate than anyone else's.