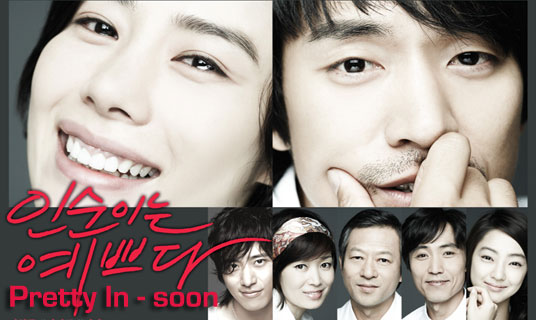 Park In Soon is an ex-murder convict who accidentally killed a person in high school and served time in prison for her crime. In her school days, thanks to her outstanding looks, she received a lot of love from people. However, after the murder incident, she wears tinted glasses and is afraid to meet people's eyes. However, she's a tough woman who hasn't lost hope, and longs for happiness. Yoo Sang Woo is In Soon's childhood friend who moved away. They lost touch with each other. Sang Woo puts In Soon on a high pedestal but when he finds out that In Soon killed somebody, he is shocked and tries to distance himself from her.

Love doesn't judge. Some say that we live in the era of narcissism, because people have their say in everything these days thanks to the widespread use of the Internet and communication as well as political and social freedom. There are always people on the street using their mobile phones and talking busily to someone. Blogs and personal Web sites have also been developing rapidly. Everybody is the main character nowadays. But despite the abundance of communication, people these days are more lonesome than ever because everybody is talking only about themselves -- about their wounds being larger than the wounds of others and about their needs being more urgent than other people's needs. Everybody claims that they are the best and the most lonely. But nobody listens to them. In the end, we all think that we are treated unfairly. The greater access we have to communication the more lonesome we feel. That is the downside of the era of narcissism in the 21st century.

Can you throw a stone at her? There is a woman who was abandoned by her mother as soon as she was born and was raised by her impoverished grandmother. She also served a sentence for accidentally killing someone while in high school. She has the worst credentials to live in this merciless world, and people easily stigmatize her as a "sinner." But who doesn't have sins? And what credentials can be better than hers from the standpoint of people who have money and power? What does a "sin" mean to humans? Who will dare to throw stones at her?

as Park In-sun The incident that occurred while she was in high school completely ruined her life. She accidentally killed her friend in a hand-to-hand fight and served a long sentence, turning from a cheerful and brave girl into a timid one. Her grandmother was the only family she had, but she died right before In-sun was released from prison. She believes that her life has been cursed because her mother abandoned her as soon as she was born, and then her friend and grandmother died. Her high school teacher is her only hope. He did his best to release her from prison, and he believes that In-sun can succeed.

as Yoo Sang-woo This guy looks perfect on the outside: tall, good-looking, eloquent and a graduate of a prestigious overseas university. He comes from an affluent family and has a prestigious job. People think of him as a typical son of rich parents for his self-confidence, sense of humor, modesty and charisma. But he as well has a past that he wants to hide. His family was destitute when he was young. He had to skip meals often, while his peers bullied him for wearing dirty clothes. He wasn't good at studying, either. But now all that is the thing of the past. He acts as if he were born into a rich family. He wears only luxury brand clothes and works out at an expensive sports center. One day he runs into In-sun, his middle school classmate. He is curious about her, but he ends up being entangled with her against his will, which irritates him a lot.

as Chang Keun-soo. Keun-soo used to live in the same house with In-sun as a child. They were like brother and sister. In-sun's grandmother brought him after she found him roaming the streets alone. He liked In-sun like his elder sister but his affection for In-sun and her grandmother often crossed the line. He is a rough and forlorn soul. He disappeared after In-sun was put to jail, and showed up again after many years -- but not to apologize for his cowardice. He doesn't believe in warm feelings and disdains compassion, charity, sacrifice, love and sincerity because life doesn't turn out as he wants.