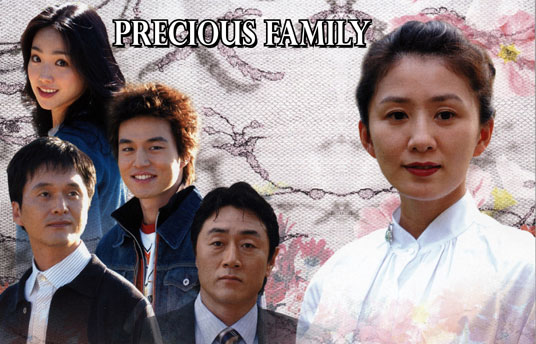 For KBS Photo Gallery from this drama : http://www.kbs.co.kr/drama/family/art/photo/photo.html
Brief Synopsis

Despite a marked individuality of each of them, the members of the family resemble each other in that they are all good-natured. This drama is a story about a good-natured family whose members endure hardships, love each other, and live a virtuous life...

These days, many parents seek divorce and abandon their children carelessly. But here is a woman who manages to maintain her married life with difficulty raising an autistic son alone, whom his own father has given up.

"Precious Family" is a woman's story that awakens us to how precious and important the home is and what is the meaning of the married life.

The drama focuses specifically on the reality in which the father may choose to take responsibility for his son, but the mother has no choice but to fulfill her duty as a parent.

Ahn Seong-sil, 35, femaleSeong-sil is the oldest daughter of the family. When in high school, she was already chosen as the future bride by a son of a businessman who owned a taxi company and a movie house. She gave up her plan to go to college and married him. She gave birth to a girl when she was 21. The girl is now 15. Another child is a 12-year-old son who is autistic. Unable to accept his autistic son, her husband has left him to his wife's care. As time goes by, conflict has developed between them and affection for each other has naturally abated. In a situation where she can't afford to take her eye off her son even a moment, her husband nearly tortures her for absurd reasons whenever he gets drunk. Despite her tremendous amount of patience, she feels she has almost reached a limit. Although she was not so extrovert before, she has grown more reticent as she has gradually become exhausted in life... Her daughter has happened to read a text message on her father's cell phone, and Seong-sil comes to know that her husband has another woman in his life. Except her, nobody in the family knows about the change in her husband.

Ahn Ji-hwan, 32, maleJi-hwan is the second child of the family. He commutes to a bank in a new town nearby. Like his father, he is a reticent man. If left alone with his father, he exchanges only a few words with his father all day long. He goes steady with a girl and is old enough to marry, but has come up against a snag because of disparity of wealth between the two families. Both of them are indecisive due to his concern about his future mother-in-law who lives alone and her worries about her future in-laws.

Ahn Jeong-hwan, 28, maleJeong-hwan is the third child of the family. Though it has been over a year since he finished his military service, he has failed to find a job. He is carefree, cheerful and active, and looks on the bright side of everything. While trying to find a decent job, he doesn't mind working as an odd-job man at the construction sites or as a waiter at nightclubs. Equipped with a thorough sense of economic values, he is stingy with everything to the extent that he would never spend a single penny unless he faces a dead end. At every opportunity, he tries to squeeze money out of his brother or even older and younger sisters. His goal is to make 500 million won within five years. Since very young, he has already learned some techniques of Karate, Taekwondo and Judo, and even tried his hand at boxing. As a result, he has never been beaten in fights, but gotten into trouble sometimes. He boasts of himself as well-built and is still preoccupied with building his body. He doesn't hesitate to remove anything that stands in his way. Sometimes, he manages to solve problems without making his presence in the trouble scenes.

Ahn Seong-mi, 24, femaleSeong-mi is the fourth and youngest child in the family. She works at the office of public relations at a foods company. She plays the baby to the family members, but shows her responsibility and competence at work. She appears nice and girlish to men, but turns nearly into a tough to her close friends or acquaintances. She, therefore, professes herself to be a girl of multiple personality. She shares a one-room studio apartment with her co-worker in Seoul and comes home on weekends. She becomes irritated because she has to leave the apartment so often for her roommate to invite her boyfriend. She doesn't deny the life values her father has taught, neither does she want to live a boring life like her mother.