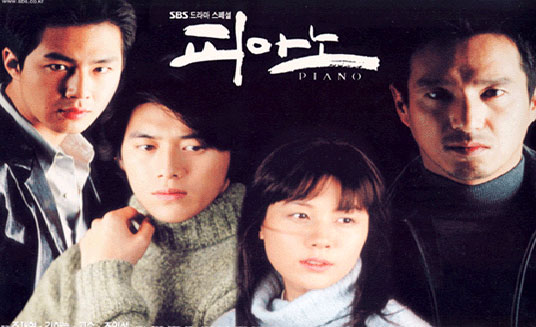 Uhk Gwan (Jo Jae Hyun) is a ggang pae but one day, he discovers he has a hidden 10 year old son named Jae Su. One day, he sees Hae Lim (Jo Min Soo) and falls in love with her at first sight.

Hae Lim is a widow with two kids, 12 year old girl named Soo Ah and 10 year old son named Kyung Ho. She just moved to Pusan and opened a piano school. But somehow, her image gets destroyed and she finally accepts Uhk Gwan's love and the two marry. But shortly after, Hae Lim dies in a boat accident. Years later, all three kids are older and were raised by Uhk Gwan. Jae Su (Go Su) and Soo Ah (Kim Ha Neul) are deeply in love with each other but they cannot express their love because they are family, although not by blood. Kyung Ho (Jo In Sung) is a rebel and turns into a ggang pae too. The drama traces the struggles of these three kids and Uhk Gwan. (source: Soompi.com (http://www.soompi.com))

There's something about Piano that sets it apart from other Korean melodramas. If I had to describe in short, I would probably call it a drama about tormented souls who can't find happiness, because they don't learn to let go of things and to love one another until it's too late. It was my first time seeing Go Su on screen, and besides Jo Jae Hyun (the older one), Go Su gave a impressionable portrayal of Han Jae su. He was perfect gentlemen, the sacrificial, understanding and forgiving son, brother, friend, lover, etc. (The actor who played young Jae-su was also commendable.) Unfortunately, I haven't heard or seen much of him since Piano. Jo In sung's performance was no where as good, and yet he's much more successful now.

Although I usually see the promotion leaning towards the younger generation of casts, i.e. Go Su, Kim Ha Neul, and Jo In Sung, the story is one told of two distinct time frames and settings, one with Jo Jae Hyun & Shin Hae rim (the parent generation) leading, the other with the children.

I heard Jo Jae Hyun grabbed best actor that year and rightfully deserved. First, his character, Han Uk gwan is scorned upon as a pathetic "gangster"--if you can even call him a man, then he was a man with no pride or shame, a father that attempted to desert his own son numerous times. But his encounter with Jo Min Soo entirely turned his life around. This is one of the most significant and beautifully-shot scenes in the drama-when he sets eyes on her and falls in love at first sight.

However, although marriage usually symbolizes happiness and warmth, as soon as the bonding between these two lovers are made, the suffering of the step-children begins. Lee Soo ah (Kim Ha Neul) & Lee Kyong ho (Jo In Sung) could not accept their second father, not mentioning one fares pale in comparison to their late respected father. Complicating the process, Jae su (Go Su) & Soo ah experiences somewhat of a love dilemma as they've build feelings for one another and now carry the titles of siblings.

A twist of fate strengthens Soo ah & Kyong ho's resentment towards their stepfather, despite him relentlessly trying to win them over. The theme song was excellent, and went along with the opening theme very well (despite not understand a word, it was emotionally provocative, and I didn't fastforward any of it!) and the version I had also alternated the Korean version with a Mandarin rendition by Fan Yi Chen, which was equally good.

The story is slow-moving with a lot of teary scenes. The dialogue is limited, but the strength of it is in the cast and touching storyline. The central theme revolves around family. The characters in Piano may appear weak as they end up suffering because of their lack of courage to stand up to do what they want, yet you feel their burdens and torment.

One of the most memorable scenes is when Soo ah takes a broken piece of glass up to her wrists to threaten Jae su to stay away from her when he tries to confess his love and force her to do the same. Soo ah is the character that appears to be strong on the outside, but fragile within. She appears cold as ice in front of other people, but is the one who breaks down the most, full of self-doubt and conflicting feelings.

This is a quality drama, which I think is rare, but may require the right mood to appreciate the overall depressing atmosphere throughout the entire drama. Sorry if relationships were cluttered, just writing as it comes to me, hope it makes sense.