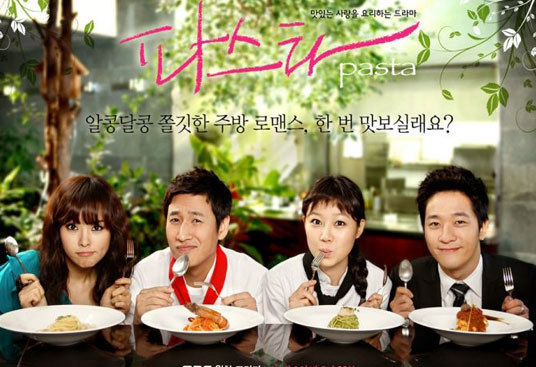 "Pasta" covers the dreams and success of a young woman who aspires to become an elite chef at Mamma Mia restaurant.

A recipe of love and passion among young and attractive chefs. We invited you to the Italian restaurant named "Mamma Mia"

Yoo-gyeong has worked at the Italian restaurant Mamma Mia for 3 years. Her dream is to become an Italian cuisine chef but in reality, she's a kitchen assistant. One day, the Mamma Mia restaurant newly hires Hyun-wook, a chef who went to culinary school in Italy. Upon his arrival, the female chefs are fired one by one and Yoo-gyeong finds herself to be the last woman standing. Just before she's about to be fired, Kim San, the restaurant owner appears. Kim San hires his girlfriend and celebrity chef Sae-young as a co-head chef to work with Hyun-wook. It turns out that Sae-young and Hyun-wook used to date each other when they were both studying at the Italian culinary school. But they broke up after Sae-young stole his recipe to win a cooking contest. They turn into rivals and try to outdo each other in making the finest Italian cuisine. Working alongside two celebrity chefs, Yoo-gyeong feels small and insignificant. She gradually develops feelings for the charismatic Hyun-wook. However, restaurant owner Kim San begins to become attracted to the spunky Yoo-gyeong and the relationships between them become fraught with complexities.

The daughter of a Chinese restaurant owner whose mother died of cancer, she dreams of becoming a celebrity chef. Having graduated from a lowly culinary school, she starts the series as a kitchen assistant for 3 years at La Sfera. She has a spunky attitude and she finally gets promoted to chef in the first episode, but after a new head chef, Hyun-wook, is hired, she is on the verge of losing her job. She barely hangs onto her job, thanks to the restaurant manager who intervened on her behalf. But Yoo-Kyung has a long way to go until she will earn any respect from chef Hyun-wook for her cooking skills. She makes an effort to learn as much as she can from Hyun-wook and he, in turn, starts to grow fond of her. However, when Kim San, the restaurant owner of La Sfera, returns, her relationship between Hyun-wook and Kim San change abruptly.

A chef who rose to the top of his profession after starting at the bottom in an Italian restaurant in Sicily. Offered a hefty salary and housing from the La Sfera restaurant, he decides to become the head chef of the establishment. He detests female chefs after having a bad experience in the past and proclaims, "There will be no women in my kitchen". When his ex-girlfriend Sae-young joins him at the restaurant as co-head chef, he frequently quarrels with her and then makes up as they create wonderful cuisine for patrons.

She's Yoo-gyeong's role model as well as her roommate. Sae-young has her own cooking show and is the most celebrated female chef in Korea. During her years in Italy where she went to culinary school, she dated Hyun-wook and ruined his recipe to win a grand prix cooking contest. After returning to Korea, she instantly became a celebrity chef but when she's reunited with Hyun-wook, she has conflicted feelings towards him.

He's the actual owner of the La Sfera restaurant, but he hides this fact and poses as a regular restaurant patron for 3 years. One day, he takes a peek at Yoo-Kyung's notes and develops an interest in her. Nobody pays much attention to Yoo-Kyung, who is a kitchen assistant, but Kim San watches her closely. He helps Yoo-Kyung from behind the scenes unbeknown to Yoo-Kyung.