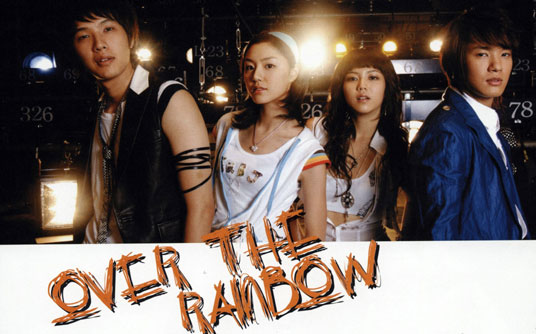 For MBC Wallpaper from this drama : http://www.imbc.com/broad/tv/drama/rainbow/wallpaper/index.html

For MBC Photo Gallery from this drama : http://www.imbc.com/broad/tv/drama/rainbow/photogallery/index.html

The bright and dark side of the world of stars is dramatically captured in this drama by giving a realistic depiction of singer-wannabes ambition and their dash for stardom.

A story about the painstaking work it takes to become a popular singer,the intrigues and betrayals arising from constant meetings and partings,and heartbreaking love that blooms amidst all that.It presents viewers with a glimpse of a life that burns like a flame.

Kwon Hyeok-ju (Lives and dies for pride and loyalty. Without them, he's nothing.) played by Ji Hyun-woo

Very proud and clear about what he likes and what he doesn't, Hyeok-ju is stubborn as a mule. When he decides that he wants something, there's nothing that can stop him. To put it nicely, he's straightforward and to put it not so nicely, he's a simpleton. He was good with his studies until his elementary school years. However, because of his innate personality, he couldn't help but pay back those who beat up his friends and confront anyone who provoked him, and before he realized, he ends up becoming the biggest bully on the block who even gets recruiting offers from 'brothers' of crime organizations. But when Hyeok-ju forcibly got on the stage for a 'Youth Dance Contest' as a punishment for some trouble he caused, he received explosive cheers and attention for the first time in his life after having been treated as a mere headache for so long. It was a moment that lifted his heart and made him see that there was another way to achieve a cool, short yet impressive life other than becoming a member of an organized crime syndicate. A few days later, at the scheduled interview with the brothers of a crime organization, he drops a bomb.'Brothers! I want to become a singer!!'Since that day, he devotes all his energy to nothing but dancing. And one day, he has a fateful encounter with Lex...

She starts conversations with strangers and talks at length about anything that comes to her mind. She likes to poke her nose into other people's business but gets no thanks in return. She couldn't care less about self-respect. She just forgets whatever that hurt her feelings. Or just takes it as she wants... Being witty and cunning, she always keeps coming up with a new idea and acts on it. She's so hyperactive that she can't sit still for a minute. She tells lies with the most innocent look in the world on her face. Don't fall for that naïve look, or you will regret it big time. Hotheaded, she will knock the bottom out of everything and say whatever is on her mind when she thinks she has put up with enough. She gets pretty scary at a time like that. She turns into the Hulk. Ever since she was young, she would escape to the world of imagination whenever she was troubled. She wanted to become the girl in A Little Princess, and after realizing that it was impossibility, she then dreamed of meeting Daddy Long Legs, and the same pattern ensued for virtually every character in comic books and TV shows. And one day, she sets her mind on something.Be a star!! Or become a star's girl friend!! Why can't she be one when others can? And one day, it really happens!Is her dream coming true, at last?

Lex (A genius musician with a fan club of nearly 100,000 members) played by Hwan-Hee

Lex is a singer with boyish good looks and outstanding talent, and is the biggest asset to Pride Ent., an entertainment agency. He's got perfect pitch and is a natural dancer, too, for he can repeat any choreography that he has seen just once. Having a volatile personality, he is the nicest person in the whole world when he is in good mood but no one can stop him when he gets cross. He hurts others’ feelings with sarcastic and mean remarks, and even gets violent, smashing everything around him. He wasn't like that when he was an aspiring singer but as his first album became a huge hit and the second album followed suit, his temper has grown only worse.

He is a smooth operator, seducing girls who he thinks meets his standards. But when the girl completely falls for him, he suddenly loses all interest and dumps her. He is only attracted to girls who consistently show no interest in him. And what happens if a girl does leave him? He gets hurt in his own way, thinking that her love for him wasn’t absolute after all. In a nutshell, he’s trapped in a vicious cycle of love.Then one day, he meets a girl who throws a sharp dagger at his heart by turning her back on a star who’s got 100,000 fans as if to demonstrate her complete disinterest in him.Her name is Hee-su.. And Lex is interested.

Jeong Hee-su (Has a passionate soul!) played by Kim Ok-Vin

Born with stunning looks, great talent and a passionate soul, Hee-su is cheerful and always smiling, yet she’s got a strong charisma that makes it impossible for others to mistreat her. A girl with huge talent and bravery, she is quite sure of herself in everything she does and is clear about her likes and dislikes. She spent her teenage years quarreling with her stubborn, conservative parents. She would lie that she was going out for missionary work when she was actually going out to dance the night away with her African-American friends on the street.One day, after hearing that representatives from Pride Ent, a Korean entertainment agency, were going to attend a dance festival in search of new members of a music group, she begins practicing very hard. She almost makes it to the stage when she gets caught by her father, and is dragged home and gets locked up in her room. That night, she gets beaten up by her father within an inch of her life, and is informed that she will be transferring to a boarding school. That night that she packs her stuff and leaves home with a calm look on her face. She has nothing left in a house that stops her from realizing her potential. She boards a plane bound for Korea with nothing but a business card she got from an agent in her hand.

Hyeok-ju's father is full of hot air. When he sets his mind on something, he goes all the way with it till the end. When he was selected at a cabaret's stage audition that he didn't think much of at first, the thirty-something man became confident of his talent and started knocking on doors of recording companies to make his "debut album" in earnest. But he wasn't so lucky with other auditions and in most cases, he didn't even get a chance to audition. Dubious record labels swindled him out of his money, asking for down payment for the album they promised to produce for him. Before he knew it, he sold off the rice paddies and fields back in his country hometown and his parents passed away due to an illness caused by severe anger and frustration. Nevertheless, time kept passing him by and he now finds himself in his 50s, being the head of his family.If other people of his age can become successful singers, why can't he?"Becoming a singer," or rather, releasing just one album! His self-respect will not allow him to give up that dream.

Hyeok-ju's mother Mi-ja is a tough woman who practically raised Hyeok-ju and Ji-hye all by herself, while paying off the debt her husband piled up, pursuing what was only useless. With her frequent swearing and smack on the backs of her children, she seems ill tempered, but she is by no means a hardhearted person. She always ends up letting her children do whatever they want, pretending that she can't win them. Though she always gives a hard time to her husband for having wasted the family's fortune away on affairs with other women and a futile pursuit of making a music album, she is wise enough to let her husband have full authority at critical moments.

Hyeok-ju's sister who is a year younger than him, Ji-hye is a model student who has maintained good grades at school, very much unlike her brother. Hyeok-ju and Ji-hye have been cat and dog from childhood. When they quarrel, Hyeok-ju is no match for her because she has a glib tongue, clear logic and a hot temper as well. Believing she is much smarter and more mature than most kids her age, she consistently ignores and disregards Hyeok-ju's "gang" who swarms about here and there to dance.Then, as if hit by lightening, she gets a crush on Brother Gas, a beefy, masculine guy who was working without his shirt, on a hot summer day.

Though naive and good-natured, he is a simpleton with hot air and is a bit of a show-off. He is good at fighting but he doesn't pick a fight recklessly, and his skills aren't that impressive in the first place. He places the highest value on friendship and loyalty. Despite being stingy, he never hesitates to use his emergency funds to treat Hyeok-ju to meals when he became a dancer, or to buy him a few drinks when Hyeok-ju comes back after giving up on his dream. He is very proud of Hyeok-ju and has strong faith in him.

Choi Gyu-ho (a.k.a King Mart) played by Choi KwonHe had the whole world when he was in elementary school. His father ran a hotel with spa facilities and had many real estate properties. At one of the sites his father owned, he couldn't even see the end of the land. His father was a real estate tycoon.He was the center of the universe, back then. But when his father's acquisition of another hotel went wrong, leading to his bankruptcy, Gyu-ho's grades started to fall and his personality became increasingly twisted. His pride of having been a wealthy kid once is what troubles him even today. Currently, he runs King Mart, the biggest supermarket in the vicinity of Hyeok-ju's school.

Good-natured and sincere, smart and affable, Won-gyeong is a perfectionist who has to complete what he has started and punishes himself if he makes even a minor mistake by going into a closet and banging his head against the wall. He has been an obedient son since he was a little boy, but he got so fascinated by the world of dancing, which his friend introduced him to during his junior high school days, he ditched his studies and went to learn how to dance. During high school, he was preoccupied with the school's dancing club, so he attended school only halfheartedly and barely managed to graduate, after which he got himself an audition and was hired as a backup dancer of Pride Ent. That's when he met Hyeok-ju whom he began looking up to as his idol.He was impressed by Hyeok-ju's warm and caring personality, who simply says, "What? Dude."Since Hyeok-ju's debut as a solo artist, the two share each other’s ups and downs.

A legendary underground dancer, who was once a member of Moonlight. He is the "real McCoy" that has both outstanding dancing skills and loyalty.As the leader of Gangster, a music group, he gives emotional support to his group members.

Over the Rainbow trailer