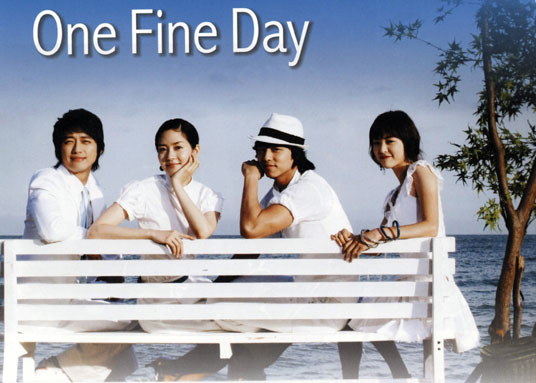 For MBC Wallpaper from this drama : http://imbc.com/broad/tv/drama/onefineday/wallpaper/

For MBC Photo Gallery from this drama : http://imbc.com/broad/tv/drama/onefineday/photogallery/


'One Fine Day' is a drama about a girl who works at an aquarium as an aquarist, that reunites with her brother from whom she's been separated for 15 years. Different from other dramas, this one was shot in Australia, giving the viewers many beautiful new locations to look at. As it introduces a new kind of occupation, called an aquarist, it uses many different kinds of underwater filming techniques. These new techniques use a HD camera, which captivates the viewers with great pictures.

'As common as the grains of sand on a sandy beach, as common as the lyrics of a love song we are about to add on another love story to this common theme.'This drama is a love story.You might say 'Another love story?' Yes it is another love story.The drama might turn out to be another typical and ordinary love story and you might wonder why we even bother to tell another love story... the reason is because love stories are still the interesting stories and there hasn't been a true love story that's been told. People still have a great interest in love stories.In this drama each character holds a problem with his or her heart (love). A guy who thinks that he never had a heart from the beginning and a girl who thinks that this very man is her heart and another guy who, after losing the one he loved, thinks that he doesn't have a heart anymore, and a girl who looks weak but has the most powerful heart out of them all, which helps make everyone's heart beat again. The story of this girl is the main subject of the drama.These four characters...Face such serious and cruel trials and tribulations that they make them want to die waiting for their resolutions.Therefore there might even be some who say that these characters shouldn't even have started up their love in the first place.But while this drama is in process our one wish and hope is that all the viewers while watching the characters fight against fate, cheer for them in the hope that they attain their love and that fate might just pass them by. Our last hope is that by watching this drama the viewers come to think that if they were in the characters shoes they would endure all the pain and hardships needed to attain their love.And so by the time the drama ends we hope that the viewers thirst, interests and expectations about love are all filled.

'Gun' a name his father gave so that he would grow up toencompass the whole world like the sky.But now Gun is a 'yellow gun', a backstreet gangster.His name is also his nickname because of he has a fast fist and because without question he knocks people down with his first punch. He doesn't even need to take around a mob or worry about other gang members attacking him because they don't even dare to touch him.His main job is swindling and the thing he does best is lying.If someone asks why he is in such a business his answer would be it's the same as asking why someone puts the bean paste on the lettuce and not on the meat when eating meat wrapped with lettuce or how people came about putting on their pants before they put on their shirts. He came to Australia, a land he wasn't familiar with, lead by Kyung-taek where he became quicker at packing his suitcase than his school bag due to all the late-night runaways. On days when Kyung-taek would not come home he had to lie and beg for food.At times Kyung-taek would get drunk on cheap vodka and start singing 'Mok-po’s Tears' and Gun would fall into his faint memories.In his memories there is a girl who cries without a sound, a girl with tears rolling down her face.When Gun was adopted in Australia after his parents' death he went a week without any food or water insisting that he would not go unless it was with his little sister, but Kyung-taek did not give in. Unfortunately, he promises his little sister to some day come back for her. Not knowing how far Australia was from Korea he just gives his oath to keep his promise with her.He thinks that these memories have become as faint as a fossil from the Paleozoic era, but he comes back to Seoul and gets a call from Sung-chan telling Gun that he has found someone with the same family picture as Gun's

She has lived 15 years of her life as Park Hae-won instead of Suh Ha-neul. Gun might be the best at lying in this world, but she is almost as good as him. Actually she is a level above him.Everyone knows that Gun is a liar but no one even has the slightest clue that Ha-neul is.Acting as if she were happy, joyful, and not lonely, you name it she can do anything.She should have already been a college student but since she has been living as Park Hae-won she is still a senior in high school but soon she is going to quit everything.She has been planning to get away from this house even though everyone says being born into the house is like winning the lottery. She looks very weak, as though if someone hugs her every bone in her body would break, but she carries a strong and audacious character inside of her.Before Gun left she thought that having a brother was the best thing anyone could ever have. While other kids called their moms when crying she cried calling out for her brother, but her parents left her and her brother then soon after her brother also left her.In her new adopted family she also has a brother.Ha-neul, thinking that all brothers were like her brother, was surprised when she saw her new brother Tae-won.Her new brother always snapped at her, yelling 'You're not my sister!''Her adopted mother's love towards her made it hard to breathe and sometimes it's what kept her from leaving.Who else would be able to love her the way her adopted mother did? All this love starts to get to her, but right when she is about to run away from it all her brother, who told her that he'll be back to get her, really comes to take her back.Just like it hasn't been that long, without a change in expression...'Don't you remember? I promised you I'd come back for you. It's me.'How could she forget? She waited, counting down the days with her fingers again and again until the fingerprints on those fingers became faint, she waited...

Aquarium Curator, He is self-confident, humorous and cheerful.He seems to be the most cheerful person and has not had any hardships since the day he was born. Just looking at him seems to make everyone forget about their hardships. He is of course very popular. Many women hit on him and he also does not push those away that come to him. He likes to bet and always bets on everything; for example 'If I can throw this cup into that garbage can then I'll go on a date with you,' or 'If you can guess the number of the next bus then I'll give you a kiss.'At first he approached Ha-neul in a joking way, but this girl is either too quick-witted or on a higher level, because no matter what he does she just gives him a smile and no special response to any of his actions.Even if he tells her that he is hitting on her she just says 'O.K.' and smiles back at him. He thinks of Ha-neul's actions as somewhat fun, and from some point watching her makes him forget about Kyung-won. Kyung-won is the woman he absolutely loved when he was about 20. The woman he lost at a beach they went together to. First he went to the beach to find Kyung-won, then he went to erase her from his heart, and finally he went to the beach so that he can be with her again. At the beach he learned that life is something you adapt yourself to.If you try to take on the wave you end up paying the price; like when you try to erase someone from your heart it just tears you up even more, and Ha-neul seems to know this. She doesn't know how to get mad or cry she just knows how to smile, but one day he sees her crying without a sound, only that of the tears falling from her eyes.The moment he sees her tears, he feels something opening up deep in his heart. He then knows that Ha-neul, who has always been smiling, was really crying on the inside.

She has 3 guys that are willing to die for her.'Dad you would die for me right?' 'Of course!''Brother you would also die for me right?' 'Yeah, sure.' 'Gun, die for me!' 'Alright.”She grew up overprotected by these three men.She not only has a pretty face but also long legs; in other words she is has the perfect body. She starts a whistling orchestra of guys, walking down the streets waving her ebony colored hair and wearing jeans and a white shirt.Among those guys there have been a lot of decent guys and successful Korean-Americans but she didn't even care to look at them. Other than her looks she is very pure.She likes Gun the best and she thinks that it's alright if her heart bursts and she dies as long as she's with him. She over-exaggerates being happy, excited, and her affections. Hyo-joo is always the one that begs for a kiss from emotionless Gun, but it's all right with her and doesn't bother her a bit.Because he's a swindler, who trusts a swindler? A person like Gun goes to Korea to find his little sister. Gun tells her that he won’t be gone for long but Hyo-joo follows right after him. She meets Ha-neul and picks up on her undefined nervousness.At first she felt sorry for Ha-neul because she felt as if she had stolen her brother from her for the last 15 years, but Hyo-joo keeps feeling nervous, worrying that Gun is going to leave her. It really seems as if her heart is going to burst.