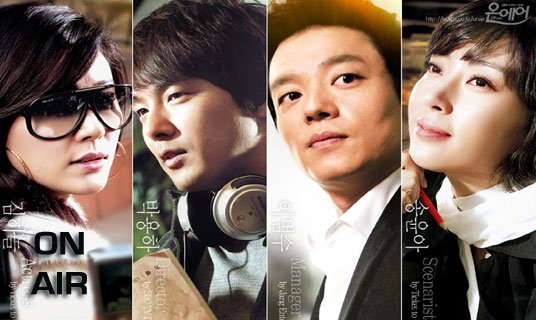 
Top actress Oh Seung-ah(Kim Ha-neul) refuses to accept the Best Actress award at an awards ceremony after finding out that she is to share the prize with another actress. In the process, she makes a fool out of Seo Young-eun(Song Yun-a) who was there to hand out the award.

Seo Young-eun is an extremely popular writer who has written corny dramas that have gained top ratings. But now she feels a need to change. She wants to write a drama series with depth. So she chooses to write about a drama that centers around a mental hospital. To get ideas for her script, she visits a mental institution only to run into Lee Gyeong-min(Park Yong-ha). Gyeong-min is conscious about the strange woman who keeps looking at him. He may look like someone from a well-to-do family but only the opposite is true. His family is very poor, and he's the only breadwinner in his family. He had come to the hospital to borrow some money from his friend.

During a meeting with the production team, Young-eun's proposal for a drama based on a mental hospital setting is dismissed. Young-eun is about to go crazy because of the head of the drama department keeps insisting that she write a romance piece about a girl in love with a rich man, only to catch a chronic illness. Moreover, the writer is seethed with anger after finding out that the main lead will be played by Oh Seung-ah. Seung-ah feels that she's unable to grow as a serious actress because the CEO of her management company is corrupt and too greedy.

The one thing she's been thinking about is to sign a contract with a different company once her current contract comes to an end. So she seeks out Jang Gi-jun(Lee Beom-su) who remembers Seung-ah. It was Gi-jun who had helped Seung-ah avoid a fraudulent scheme seven years ago when she was in her senior year in high school. Gi-jun company is on the verge of going under when Seung-ah decides to join his team. Seung-ah is intent on becoming a serious actress. Young-eun meets up with Seung-ah with a new proposal for a script. Young-eun criticizes Seung-ah for being a terrible actress. On the other hand, Young-eun is also criticized for having axed the director. Young-eun bumps into the young director, Gyeong-min, for the first time after seeing each other at the mental hospital, creating an awkward moment. They agree to work on a drama series together. And Seung-ah is to join them!

This new drama is about the behind the scenes of TV drama production. It also portrays how the whole production team and performers complete a project in a tight schedule and as well as how actors, actresses, and entertainment agencies handle rumors surrounding them. Jang Ki Joon is a manager who is in charge of the activities of many famous actors and actresses. One of them is Oh Seung Ah who is a rising actress. Lee Kyung Min is a drama PD, Seo Young Eun is a script writer with a young child.

Oh Seung-Ah is Korea's most well known top star actress at the age of 26, receiving much fame and love from the citizens of Korea being called "Korea's Angel". She is not only recognized as the nation's most beautiful actress, but is deemed as the most photogenic star as well. For this reason, she did variety of CFs, yet, she was handicapped in a way that she lacked acting talent. Even with this handicap, directors and producers line up to cast Oh Seung-Ah, since she guarantees a high audience viewer rating in every production she appears in. She is a high-maintenance diva known to be a professional in scarring people's hearts. After Oh Seung-Ah leaves her current management company, she refuses the tempting offers from a number of top agencies to join Jang Gi-Jun who has nothing, and surprises the world.

30 year-old Lee Gyeong-Min is an elite graduate of Korea's top law school, Seoul National University, and is currently a producer at SBC Broadcasting Station. Though he wins a number of awards for his short film productions, due to his reserved and straightforward nature, he was never to break out of the role of assistant director. Lee Gyeong-Min is a handsome man, but has no interest in fashion or style. Although he leads a depressing life constantly having to take care of his problem maker older brother, Lee Gyeong-Min is not one to kneel before money or power. He eventually signs star writer, Seo Yeong-Eun, to work on a production together after facing great adversity, but new trials and tribulations await him everyday. Lee Gyeong-Min is always at ready to fight for a truthful production, putting his principles and morals above all else. He is a shy character amongst strangers with a blunt and unsociable personality, but often shines a charismatic smile to friends dear to him.

CEO of Jang Entertainment, Jang Gi-Jun was once a manager that fostered Koreas best top stars. However, all of his stars change management companies to a larger agency, leaving him with a young new star, Cherry. After he raises her, even she leaves him for Manager Jin, then falls into bankruptcy. Jang Gi-Jun is a confident character, willing to do anything and everything for celebrities under his management, showing devotion and self-sacrifice. One day, top actress Oh Seung-Ah approaches him, a young girl he knew 7-years ago, to make a contract proposal, allowing him to make a successful comeback into the industry.

At the age of 36, Seo Yeong-Eun is an invincible figure in the entertainment history as Korea's best star writer. After going through divorce with her husband, she juggles her life as a drama writer and single mother of her only son, Jun. She is a writer of dramas with the usual plots, but still makes a huge success bringing in a high-salary of 20 million won per episode. Seo Yeong-Eun is therefore a stylish and charismatic character, wears popular brand-name clothing and driving around in foreign cars. She is an extremely prideful character who, from time to time, spits out immature words to protect her own pride. However, more than anyone else she is very kindhearted and gentle so her feelings often get hurt easily. She tries to hide her sensibility as a writer, but is slowly drawn out as she begins to work with Producer Lee Gyeong-Min. Her uniquely bright manner of speaking can be comical, but when she falls into moments of deep emotions, she turns into a young girl, adding a variety of degrees to the character.