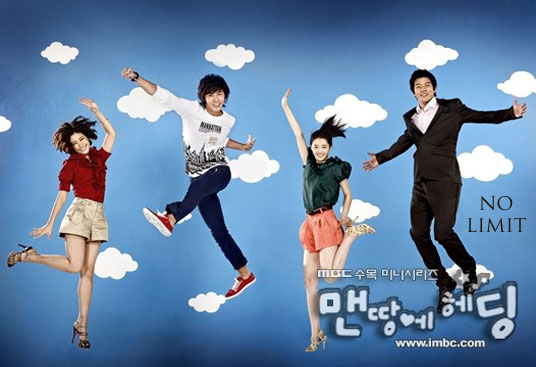 Also known as: Heading to the Ground

[No Limit], a story about a talented but misfortunate soccer player will air on September 9th at 9:55pm.

Bong-gun, a soccer player with great potential, wants to become a member of the national soccer team. As he works towards his goal, he meets Hae-bin, an attractive and independent rookie sports agent who ends up bickering with him all the time. With Seung-woo, an elite attorney, as his arch-enemy, Bong-gun's journey towards love and success is rough. To make matters more complicated, it turns out that Yeon-lee, Bong-gun's childhood friend and the soccer team nutritionist, has a secret crush on him.

This drama is already gathering much attention because it stars U-Know, a member of TVXQ (Korean name, Dong Bang Shin Gi), Korea's top boy band with over 800 thousand official fans. U-Know will play the role of Bong-gun and make his debut as an actor. U-Know says he can relate to Bong-gun's situation because acting is to him, what soccer is to Bong-gun. He is very enthusiastic about his participation in this show.

Koh Ara, star of and recipient of the PaekSang Arts Awards' Best New TV Actress Award plays the role of the charming sports agent. Other casts include Lee Sang-Yoon for the evil attorney and Lee Yoon-ji for the soccer team nutritionist.

This autumn, TV viewers will be thoroughly entertained with the excitement and romance featured in [No Limit]

He kicked around a soccer ball with all his might since he was a young kid and became a soccer player at a league team with a dismal record. He has a knack for always being at the right scoring position and has a powerful kick. Yet his life away from soccer is full of trouble. Due to his hot temper he is always getting into fights. One day his team is disbanded and his professional career as a soccer player becomes precarious. Then a sports agent named Hae-bin appears in his life. The bitterness he has towards Seung-woo turns for the worse when they both try to win Hae-bin's love.

She's the daughter of the president of a chaebol that owns a soccer team in the K-League. She's an avid fan of sports. When her dad disappoints her by having an affair with his secretary, she moves out of the family home as soon as she graduates from college. She finds a job at a sports marketing firm and works as an agent for soccer players. In the male-dominated sports industry, she is scorned and belittled since she's the only female sports agent. While constantly bickering with Cha Bong-gun over little matters, she gradually falls in love with him. She sets a goal of making Bong-gun the most marketable player in soccer.

He was admitted to a prestigious university with the highest score among his freshmen class. He later became the youngest person to ever pass the bar exam. He has never lost any competition during his life and has supreme confidence of his abilities. He is admired by everyone and there's one girl he truly loves. That girl is Hae-bin. But Cha Bong-gun, a mediocre soccer player, tries to win Hae-bin's heart. How dare he! He boils with anger when he sees Hae-bin looks at Bong-gun affectionately.

She is a childhood friend of Bong-gun and they went to the same elementary school as kids. She works as a nutritionist for a soccer team. She has a crush on Bong-gun but doesn't have the courage to confess her feelings to him. She's an lovable liar.