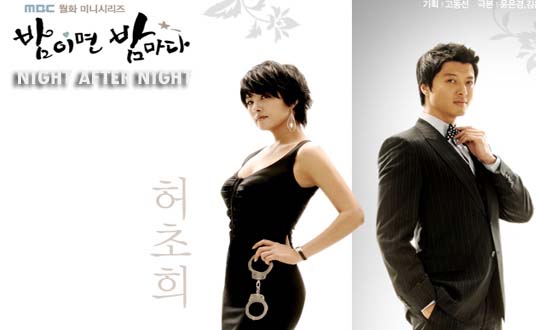 Also known as: When It's At Night


A story about a single woman in her late thirties and an art scholar with a roving eye for young nubile girls who try to recover a national treasure.

Professional tomb raiders who can tell apart a Goryeo celadon from a white celadon by just smelling the dirt surrounding them and a detective who can tell what kind of criminals they're dealing with by just surveying the remains of a looted tomb... There are others such as the inspectors who dedicate themselves to catching tomb raiders out of patriotism and an art expert who uses high-tech gadgets and his extensive knowledge to spot fakes... These people are involved in cases surrounding cultural heritages and the ups and downs of their lives unfold in this drama with exciting episodes. The leading male character is an art expert who detects forgeries and restores original art pieces who doesn't get along with the leading female character who is an inspector working for the Cultural Heritage Administration of Korea but they work together to solve the case of stolen cultural heritage pieces and they find love along the way. Watching their bizarre dating ritual, people will feel sorry for them and at the same time vicariously feel a flutter in their hearts. There are poignant scenes where the inspectors develop a friendship with the looters they put behind bars. Using high-tech gadgets, the inspectors restore art and identify fakes in this interesting, heart-stopping drama.

She arrests tomb raiders who poach ancient artifacts but her dad is a tomb digger, too. After her dad goes missing, she joins the Cultural Heritage Administration of Korea and recovers a national treasure that her father stole, drawing her father's ire and making her an outcast at the administration for being the daughter of a tomb digger. Because she was born with a sexy figure, she becomes the focus of many malicious rumors and after meeting Kim Beom-sang, she realizes that she was very naive about relationships and decides to take him on with a fierce determination.

A leading art expert and restorer. He can detect the slightest imperfections in forgeries in seconds and restore a pottery vase even if it has been shattered into small piecs. On top of his skills, he has a handsome face. But he is a male chauvinist with a big ego. He has no patriotism, respect for others, understanding disposition, or compassion. Kim Beom-sang, a perfectionist, has one archrival. She's no other than Hur Cho-hee, an inspector who works for the Cultural Heritage Administration of Korea! His life becomes a mess because of her.

He is a hard worker and loyal person who became the chief of the cultural heritages division three years ago. Five years ago he lost his wife in an accident. He is a single dad with one daughter and plunges into his work to get through the pain of his loss. But he finds himself attracted to Cho-hee and in a competition with Kim Beom-sang to win her heart. Wang Joo-hyun, the craftiest female employee at the Cultural Heritage Administration of Korea, also tries to win his affection.

She joined the Cultural Heritage Administration of Korea with the idea that she could meet a lot of wealthy young bachelors. But Wang Joo-hyun's cute looks are no match to Hur Cho-hee, the sexiest employee at the Cultural Heritage Administration of Korea. She tries to act like a graceful lady who would make a perfect wife to outwit Hur Cho-hee but the man of her dreams doesn't appear....