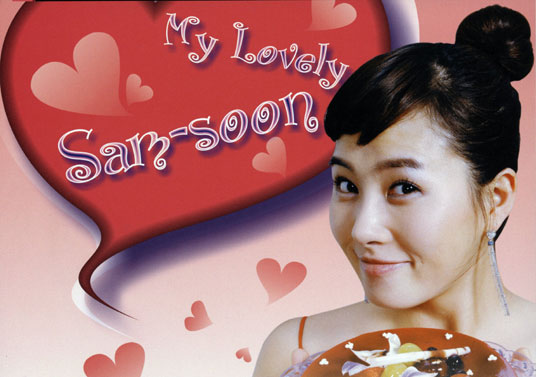 
For all average girls in the world...According to a research, 73% of Korean women believe that they are fat. That's seven out of ten. Our lead character Kim Sam-Soon is not an exception. She just gained 7kg after having her heart broken.She is a 29-year-old single who has an average life. She didn’t go to college. She doesn't have her own apartment or a car. She doesn't have a boyfriend. Although she has baker's license, she got fired last Christmas Eve. She is one of us.Women like her dream of romance that happens only in the movies, but they also know that it won’t happen to them. They believe that they’ll be happy as single if they love their work. Many of them dream of traveling the world for their whole lives. Sometimes they flutter when younger men try to flirt with them. They begin to feel pressured because they are afraid of aging. They still dream of something big happening though, something that will awake their forgotten dreams.A Romantic Comedy Full of TastesThe drama is full of interesting and attractive characters. All characters have unique personalities and intriguing traits.The plot of the drama is simple. But it has something for everyone. You will be able to relate to some characters in the story. They get their heart broken, get over their unsuccessful romance and move on. They work, get stressed, laugh and cry. They seek comfort and treat their emotional wounds.

Sam-Soon is an average fat woman who is always full of energy. Her father owns a rice cake shop and she's his third daughter. She used to be a basketball player in high school. She's curious and talks to herself often. When stressed out, she'll eat, drink and sleep. She loves food. She knows how she wants to live her life. She was heart broken when her boyfriend cheated on her. She tried to get over him, but it wasn't easy. One day, her boss asks her out and makes a proposal. But he doesn't want her to be his real girlfriend. He suggests Sam-Soon to pretend to be his girlfriend for a while. Sam-Soon thinks awhile over his proposal. She never liked her boss from day one. She swore that she would never fall for such a guy like him. He's selfish and cold. But now, she desperately needs money to help save her parent's house. She finally decides to take his proposal and signs the contract.

Jin-Heon suffers from his sad past. He had everything until the unfortunate accident 3 years ago. A handsome and smart man with promising future, having wealthy hotel owners as parents, it seemed that he had nothing to fear. 3 years ago, he made a mistake while driving, and the accident killed both his brother and his wife in the car. Jin-Heon injured his left leg from the accident. And later, his long loved girlfriend left him without giving him any explanation. He became cold-hearted and twisted after the accident. His feeling of guilt was too much to bear. He becomes to despise himself and convinced that he doesn't deserve to be happy. When he was in such great agony and pain, the woman he loved left him with no explanation. She only asked him to wait for 3 years. That was it.

Hee-Jin is a beautiful woman who is smart, kind and rich. She's the only daughter of a wealthy family. She was born with a silver spoon. She met Jin-Heon in high school and they were together for 6 years. They were deeply in love. When her parents moved to America, she decided to stay with Jin-Heon in Korea. She wanted to be his wife. She had to leave the country to cure her disease. She had several painful surgeries and 2 years of treatment. She fought her disease and fear of death. She only wanted to live so she could go back to Jin-Heon. Finally, her condition was remarkably improved. She goes back to Korea to see her boyfriend Jin-Heon. When she asks Jin-Heon to come back to her, he tells her that he's in love with someone else, Sam-Soon.

Henry was adopted when he was two years old by a very religious American couple. He lived in the States since then. He has practical and scientific mind yet warm and generous heart. He is a gentle person, but doesn't like to talk much. Since he grew up in the states, he doesn't speak much Korean. He fell in love with Hee-Jin when he first met her as her doctor. He did everything to cure her as a doctor. Although he knows that Hee-Jin doesn't love him as a man but only respects him as her doctor, he expects nothing from her. He knows that Hee-Jin is fighting cancer only to go back to Jin-Heon. He is just happy that he can help her and take care of her. When Hee-Jin suddenly left America without completing her treatment period, he follows her to Korea. As her physician, he stays at the same hotel with her and continues taking care of her. His only concern is her health and happiness. He truly hopes that Hee-Jin will be fully recovered soon and finally get Jin-Heon back.