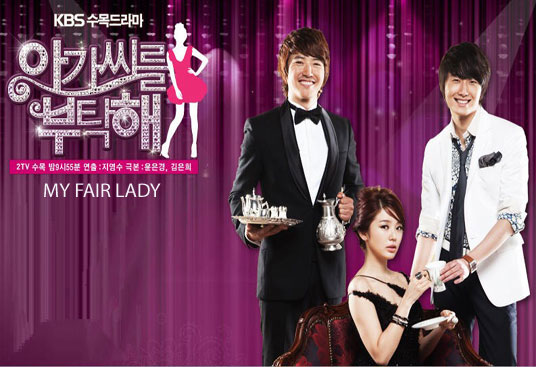 The show began with Min Kyung, a fresh high school graduate. She worked in a liquor restaurant to pay off her father's gambling debt. However, Min Kyung borrowed some money and ran away, hoping to find a rich man as her spouse.

Min Kyung was seen working as a stewardess at Korean Airlines three years later. She was known for being materialistic, especially for the men she chose. During this time, she frequently had blind dates with two or three men at a time, many of whom were her co-workers.

Min Kyung fell in love with Young Ho on one blind date. Min Kyung mistook Young Ho for a member of the Yacht Club, an association that only allows the richest people in South Korea to join.

Young Ho is the son of a poor family that made a living selling rice cakes, and worked to pay off debts left behind by his late stepfather. In the blind date Young Ho fell in love with Min Kyung, because she looked exactly like his dead girlfriend. Min Kyung later learnt about his background and returned to Dongku, her old boyfriend. Dongku made a wedding proposal during this interim.

In the course of time, Min Kyung realised that happiness does not necessarily come in money, and eventually returned to Young Ho. This results in jealousy and hatred in Dongku, who is unable to overcome feelings on seeing Min Kyung and Young Ho dating.

A jealous Dongku wanted to lay his hands on Young Ho upon learning that Young Ho wanted to be employed in his father's company (who was working as a boss with another partner). Dongku took his revenge by beating up Young Ho in a carpark, as an "agreement" to receive a job in the company. Young Ho later encountered more difficulties from Dongku before he worked as a low-profile worker upon attaining a job.

Dongku's father, whose partner is a co-boss of the electronics company, is the illegitimate father of Young Ho, so Young Ho was conceived out of wedlock. (The drama never showed Young Ho realised that the co-boss (Dongku's father's working partner) is his biological father.)

Young Ho's father observed his diligence and decided to give Young Ho a chance to prove his worth in comparison with Dongku. Young Ho's father announced that there would be a fair competition from the two men to prove their worth and decide the heir to the company.

As a rival of Young Ho, Dongku feared that his capability was inferior to that of Young Ho's. Furthermore, Dongku was jealous for having Min Kyung being engaged with Young Ho. To discredit Young Ho as best he could, he used unfair methods through forgery involving bank accounts, as a cover-up to deceive Young Ho's father.

That same night, Young Ho's father met Min Kyung's father. Dongku's father, who was drunk, knocked down the duo as they were talking to each other and crossing the road. Dongku was seen rushing and persuaded his father to escape while he called for an ambulance.

The duo were sent to the hospital. Young Ho's father was seriously injured and was in a coma. A respirator was used to assist with his respiration. Min Kyung's father sustained relatively lighter injuries.

Dongku used this opportunity to gain advantage over Young Ho in the competition to become the heir, with his father's help. Young Ho, on the other hand, was having a hard time struggling to compete against Dongku and his acts of sabotage.

Young Ho's father was seen waking up when Min Kyung came to visit him. He could not talk, but was conscious of the environment around him. Later, he instructed Min Kyung to lend Young Ho a helping hand by recruiting him into the company. Friends and relatives who later visited him thought that he was in a coma, but was in fact conscious. Later, he was sent away to a countryside villa to rest. As he was transported into the ambulance, he feigned a coma as Dongku was at his side. This was to allow him to surprise Dongku and his father when he struck at the last moment, and to expose their atrocities.

Young Ho's father was injured in the accident and subsequently used a wheelchair, needing Min Kyung's help for mobility during her occasional and secretive visits. During these visits, Young Ho's father would give instructions to Min Kyung on helping Young Ho. In one occasion, Min Kyung looked rather disappointed when she learnt that chances of Young Ho's father being able to walk again were very slim.

The day came when the heir of the company would be declared. Young Ho, who was working hard to put in his final efforts of the competition, felt hopeless as he foresaw the fact that Dongku's father would declare Dongku as heir. Young Ho's father, on the other hand, waited in his car for the opportunity to expose Dongku's father's atrocities.

Young Ho was shocked when he saw his father at the meeting. Young Ho was declared to be the heir of the company and both Dongku and his father announced their resignations.

Young Ho instead wished to fulfill his long-time dream of becoming an astronomer and announced his intention of resigning as boss in order to become a full-time astronomer, after working for a few months. With the consent of his father, Young Ho took up astronomy at a space observation centre in Australia. He later married Min Kyung, and was seen swearing their wedding vows in front of a Christian priest.

Yoon Eun-hye as Kang Hye-na (Hanna Kang) - Kang Hye-na, the owner of 'Lady Castle', has lost her parents in a plane crash. Even then, she lived a princess-like life with her servants but she had a lonely upbringing, living under the care of her stern grandfather. This resulted to her overtly indifferent and oblivious-to-others character. She has grown-up into a self-centered woman that every time she opens her mouth, she would blurt out blunt remarks no matter who the person is.

However, she has great skills on horse riding, fencing, and clay shooting. The only reason she holds these skills is to either humiliate men unworthy of her, or to add awkwardness to conversations.

One day, she came across Seo Dong-chan, a gigolo who made her life upside down. She doesn't have a good feeling about this man, Seo Dong-chan. She feels uneasy over the fact that she may have finally met her match.

Yoon Sang Hyun as Seo Dong-chan (Johann Seo / Butler Seo) - Seo Dong-chan was a former gigolo (gold-digger) who gave up his schooling in the university and his first love just to make money for the operations of his mother who has an acute leukemia. Dong-chan has good looks, eloquent speech, excellent art of living, and great skills of adapting to circumstances thus making him the best gigolo. Soon after his mother passed away, he stopped his booming career. At the moment, all he got is only five thousand debt which resulted from the charges from his mother's operations.

One day, a woman named Kang Hye-na who is notorious for being arrogant and spoiled shows up and stimulated his competitive spirit.

Dong-chan makes up his mind to enter the Castle and becomes her butler on the purpose of changing his whole life.

Jung Il Woo as Lee Tae-yoon (Rovic Lee) - Tae-yoon, an elite lawyer who came from a very wealthy family. He is devoting his life to legal service for the poor in a shabby lawyer's office. He may look like a soft and gentle young man, but when it comes to his work he is merciless and sharp like a knife. He reminds Hye Na of her first love which is why she was attracted to him.

Moon Chae Won as Yeo Eui-joo (Nica) - Eui Joo is a bright and cheerful girl who dreams to be a shoe designer. She has grown up with Dong-chan and had been the mentor who helps him do the right things. She was also the closest person who worries about him and supports him to get his life on track. Behind of Eui-ju's special interest in him, her unrequited love is hidden.

Kim Myeong-gook as Representative Kang - Hye-nas uncle (Fathers younger brother). Age : 57. Managing director of Kang-San Group, and has the scheming ambition to make this company his own. Although he has the role of the so-called villian, Kang MD also has a somewhat misplaced comical element to himself.