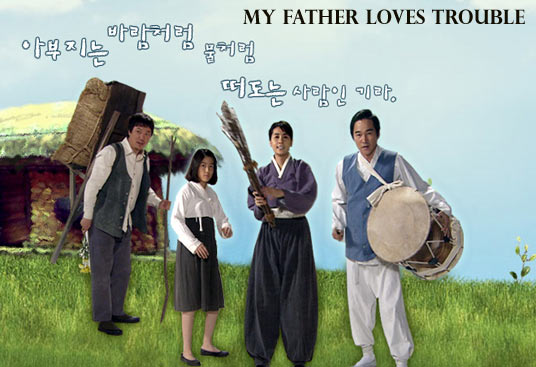 Parental love is the unconditional, the eternal, and one of the most tremendous things in the world. "My Dad Loves Trouble" is a drama like a popular song. It is a drama with laughter and tear, just like the lyrics of popular songs that touch our hearts. This drama has its background from the Korean War period to the 60's, when people were going through the most difficult time. It brings us the reminiscence of the old days and makes us to look back at oneself and family.

This drama started its life in theater, getting two encore runs thanks to its tremendous popularity and Jo Jae-Hyun's leading role, but it was peculiar that its TV adaptation ended up being produced by Hong Seok-Gu, he himself one of the most talented alumni of the Dramacity canon. His was the brilliant black comedy (Reservoir) from 2007, which is a good appetizer for this, but even those well acquainted with his work will be surprised by this little gem. With Jung Bo-Seok playing an irresponsible, selfish prick of a father leaving his family to save his bacon during the Korean War, and super-talented Shim Eun-Kyung playing his daughter Jo Gyeongsuk, this 4 episode special mixes very dark and wicked comedy with tragedy in such a breezy, eclectic way that you wonder if you're really watching a Korean TV Drama, particularly considering how polished all this looks. Family love during the Korean War has never been this intelligent. Nor this funny.