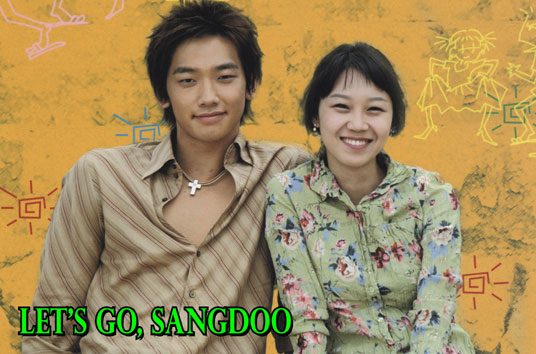 For KBS Photo Gallery from this drama : http://www.kbs.co.kr/drama/sangdoo/gallery/photo.shtml
Brief Synopsis

Sang-du is a 27-Old Gigolo and a Single Father Who Re-Enrolls at a High School for His Love. Sang-du is bereaved of his parents as a child and is raised by his uncle, a professional gigolo. Pal-lan, who falls for Sang-du, tricks him into thinking that her daughter Bo-ri is indeed his. Thus, Sang-du starts raising Bo-ri, thinking she is his daughter, forced into the life of a gigolo to make the ends meet, as she is constantly bedridden at a hospital for health problems. He, however, runs into Eun-hwan, his first love and the lover bound by fate, by chance. Determined not to lose her again, Sang-du goes so far as working as the gate security for a high school where she works as a math teacher. He even enrolls there as a 27-year old high school student, becoming her pupil. Eun-hwan, on the other hand, has a boyfriend who is a doctor, but cannot resist herself being drawn to Sang-du little by little. She tries to lure Sang-du away from resuming his "career" as a gigolo to pay for Bo-ri's hospital expenses as her health worsens...Chae Eun-hwan has been in love with a guy for fifteen years. But they neither gave a warm hug nor said, "I love you" to each other. They were always heading for different directions. People’s prejudices and hypocrisy hurt and deceived them. When other couples share love for each other, they wasted their time picking on each other, ignoring, dating others to make their partner heartbroken, and hurting each other by saying harsh words, which they did not intend to. But they never feel sad, angry or despair because they believe in love.

Her father, who used to be a teacher, divorced her mother when she was young. She had a new mother, Shim-ran, at age nine. She loved Shim-ran like her real mother as she has the feeling of betrayal from her birth mother. She did not know anything about San-doo’s life path; that he was expelled from high school, send to juvenile detention center, got lost from his adopted parents and so on. She ran away with Shim-ran, after Shim-ran took all money from her friends, when Sang-doo was brought to the police station on the same day.

She managed to enter the university in Bachelor of Arts in mathematics and graduated from there to become a math teacher. Her father died five years ago. She is living with Shim-ran, like her birth mother, and Ji-hwan, her brother. Her hobbies are playing go-stop games with Shim-ran, going to karaoke, drinking soju with left-over smoked pork legs. She is in love with Min-suk and never has any doubts that she will become his wife in the future. She thinks her relationship with Sang-doo is over in the past. She only ignores and gives cold shoulder to Sang-doo who keeps expressing his feelings for her.

He was raised by his uncle after losing his parent by a car accident. He was adopted to a rich house when his uncle left him, aged ten. Eun-hwan seemed to be his destiny when he met her on the day his uncle left. He was deeply in love with her but he never said he loved her.

He was expelled from his high school after he made a man into coma when he tried to help Eun-hwan. He was sent to juvenile detention center, expelled from the high school, lost from his adopted parents, and broke up with Eun-hwan.

He has Bo-ri, his daughter after he had one nightstand with Pal-lan who always followed him. He became a gigolo to prepare money for his sick daughter’s operation. He has made a lot of money after dating many married rich women with his attractive dance and good manner. He accidentally meets Eun-hwan again and he realizes he still has feelings for her, which controls his life. He became a security guard at a school, following Eun-hwan and he finally succeeds in becoming a student and taking her class.